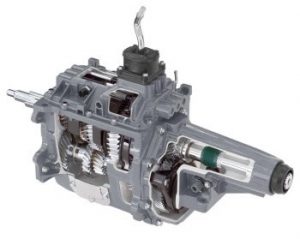 The NV4500 and consequently the NV5600 transmissions are some of the best that have ever been produced for heavy duty trucks. These transmissions are regarded as the “gold standard” for guys doing a Jeep or Bronco 4BT Engine Swap.

The NV4500 came into existence out of sheer necessity. From 1989-1993 Chrysler used the GETRAG G360 Transmission in all of it's Dodge Ram trucks but was on the hunt for something more robust to give their new line of trucks an edge over the popular Ford 150. In the 1980s Ford was the King of Trucks which featured the popular 5 Speed M50D, ZF5 and E4OD transmissions during the decade. The torque and towing power of the GETRAG G360 were severely lacking behind that of Ford and GM. The transmission faced reliability concerns as the 5W-30 motor oil would often reach high temperatures that degraded the lubricity of the oil and cause the bearings to fail. Something drastic needed to be done to put Dodge Ram Trucks on the map.

Executives at Chrysler reached out to rival General Motors to see if the two companies could put something out in the market that could compete against Ford. New Venture came into existence in the late 1980s with the merger between GM and Chrysler's heavy duty truck transmission divisions. The two companies found it to be more both innovative and cost effective to share resources instead of competing. The Muncie division of GM and the New Process division of Chrysler merged to become "New Venture Transmissions". The very first product produced by the company turned out to be a homerun right out of the gate with the NV4500 5-Speed Manual Transmission which replaced older 4 speed models.

The NV4500 concept has roots with Chrysler going back to 1972 with the New Process 4500 four speed transmission. The bones of the transmission were updated and first installed in 1993 GMC trucks under the GM RPO Code MT8. In 1995, the transmission was adapted and then released in Dodge trucks (Mostly Dodge Ram Vehicles). In 1995 the new model of the  Cummins 5.9 L contained a more powerful P-7100 fuel pump which facilitated the need of a more powerful NV4500. The NV4500 rolled out to sufficiently handle the 420 HP and 175 ft/lbs of torque with the new 5.9 L engine. Later models could handle up to 460 ft/lbs of torque. The NV4500 was last produced in 2005 year Dodge Rams capping a 12 year run of the transmission. 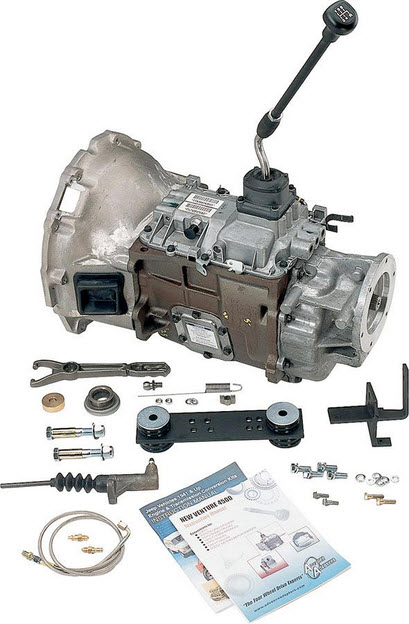 The benefits of the NV4500 are numerous. People really like this transmission because the adaptability to any GM or Chrysler vehicle... heck this thing will even adapt to Ford engines. It will fit with most any engine even though modification work is always required. With most Jeep swaps all that is needed with any Chrysler NV4500 model is to swap out the bell housing adapter plate. The Cummins 4BT or 5.9, or 6.7L will easy fit one another. The tranny also allows you to keep your original clutch setup which saves both upfront costs as well as labor. GM models are a bit different but also fairly easy to adapt into a Jeep Swap.

There are many conversion kits available for all kinds of vehicles but the real modification work is making the engine and transmission fit with suspension and axel modifications. Enthusiasts all flock to the NV4500 because of its heavy duty top loading capabilities, dual PTO ports, all helical gear design, granny low gear for towing and fifth gear overdrive for fuel efficiency. The bearings, gears and case are all incredibly durable and resistant to wear.

The NV4500 dual power take-off is popular with the 4x4 Swap crowd due to its light weight, durable frame, short length and reliable design. The NV4500, much like a 4BT Engine, is built with strength and simplicity in mind. This is an old school transmission. In fact, there are about 1/3 less moving parts as a modern 6 Speed Manual current transmission for a Dodge Ram Heavy Duty Pickup. Less parts equal less maintenance and downtime issues. All NV4500 models are built with a cast iron case and composite aluminum shift cover for maximum structural integrity.

There were several variations of the NV4500 that were produced over the years for different GM and Chrysler vehicles. The older 1993-1994 GM and Dodge applications had different gear ratios than the later 1995+ models. It took a while for the engineers to decide on a standard gear ratio for the transmission. Consequently, heavy duty applications for Cummins Diesel and Chrysler V10 engines feature an elongated input and output shaft which is not present on some of the gasoline engine applications.

Speaking of the elongated case length the NV4500 has a case length of 12.37” and an extension housing length of 6.5”. All 2WD housings are longer but the OEM stock housings contain the fifth gear which has some issues which will be discussed later in this article. What makes the NV4500 desirable is the unique fly-weighted 1st-to-2nd gear synchro assembly. This design prevents downshifting during excessive revolutions which is a fail-safe mechanism to save the transmission. The synchro ring arrangement requires a unique synthetic lubricant which can be a hindrance (see below) but overall the composition of the transmission will save a lot of wear and tear.

Lubrication of the NV4500 is one of pitfalls of using this transmission. The synchronizers are composed of carbon fiber and are susceptible to failure if not properly lubricated. The transmission fluid and viscosity levels required for the NV4500 are narrow in scope. The original early 1990s spec fluid is Castrol Syntorq 75W-90 GL-4 which has become nearly impossible to source these days. We don’t believe Castrol even makes the stuff anymore. ACDelco, Lucas Oil and MOPAR Fluid are acceptable replacements with 75W-90 and 75W-85 options that contain the GL-4 lubricant. 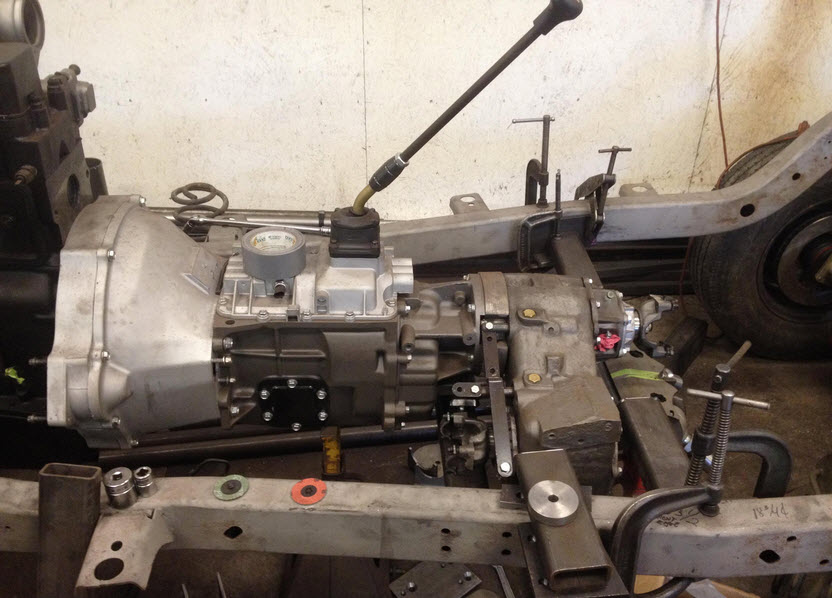 Size, Noise and Adaptability: Even though the NV4500 is small, the length of the NV4500 is not optimal for doing Jeep Swaps. It will fit but will require some modifications. There are thousands of successful NV4500 Jeep Swaps Rebuilds out there but it will take a professional modification shop to get the job done right. Doing a Swap as an amateur can be problematic. The longer crankcase of the NV4500 over the shorter Getrag G360 makes it quite the difficult mod job to fit properly with the suspension lifts and the motor mounts. It will fit a standard JK, TJ, YJ, CJ and XJ Jeep matched with a 4BT however the fit usually isn’t 100% ideal causing vibrational issues. The Cummins 4BT is already prone to vibration and noise. When you add a less than perfect pairing of the transmission to the engine via suspension modification you are going to have u-joint stress and weakness. The transmission is also fairly tall and bulky over a stock Jeep transmission which will require signification modification to add the necessary ground clearance. Installing the transmission can incur expensive labor costs due to adapting the transfer case to the engine and/or working on clutch linkages. Don't let these issue scare you, this is part of the fun of doing a diesel engine swap install!

Clutch Splines: The NV4500 is a durable old school transmission. The casing and gear structure are solid all around. That being said all transmissions will encounter strength issues if you look hard enough. The NV4500 does have some structural weakness in the transmission’s mainshaft clutch splines. Overuse of 4th and 5th gears will cause fatigue and wear between the splines and the corresponding mating hubs. A standard 4-Speed Manual or Automatic Transmission will exhibit better longterm durability without a 5th gear. The “Missing 5th gear” mentioned below in this article showcases that not all transmissions are bulletproof. 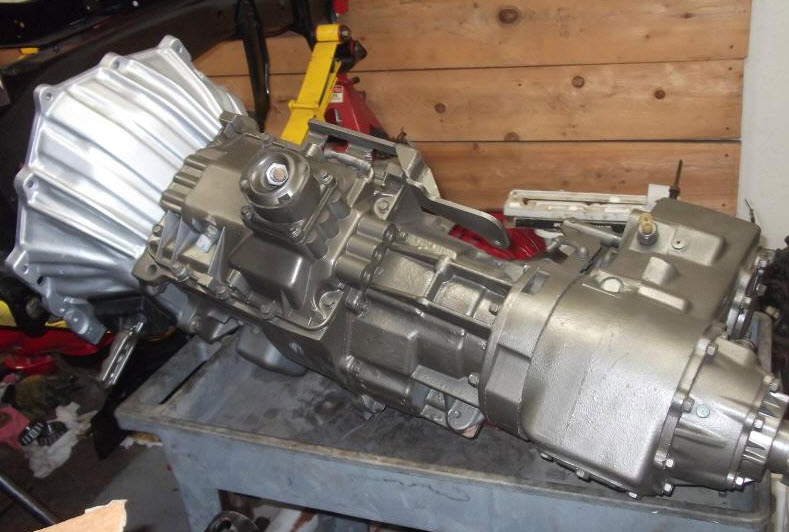 Missing Fifth Gear Issue: The NV4500 was one of the first widespread 5th Gear Manual Transmissions available for medium and heavy duty trucks. The transmission is still wildly popular with the 4x4 off-roading crowd. Most transmissions before the NV4500 were 4 speeds, the extra 5th gear overdrive function was pretty revolutionary for the truck market. However, the 5th gear on the NV4500 has a propensity to become inoperable with wear. The 5th gear lock nut has been documented to back off making shifting into 5th gear impossible. The issue was noted mostly in Dodge Cummins applications while GMC and Chevy Trucks did not experience the widespread issue. Engineers determined that the lock nut problem only occurred while regularly lugging the engine in 5th gear. Engine lugging refers to driving at full throttle while in a high gear with very low RPM. New Venture recommends customers avoid large load towing while in 5th gear. The Cummins 4BT, 5.9 L and 6.7 L engines produce excellent low end torque capable of towing heavy loads however it is not recommended with 5th gear in the NV4500. Newer models of the NV4500 somewhat fixed the issue but really it wasn’t until the NV5600 6 Speed Manual Transmission that the problem was completely eradicated.

Gear Ratios: The NV4500 is an attractive choice over 4 Speed Transmissions due to its 5th gear however it really isn’t significantly better than other heavy duty transmissions such as an SM465 or SM420 because the gear spans aren’t that much greater. They are better but not by leaps and bounds. You are looking at gear spans of 7.71 and 6.96 with early and later models. Overdrive can be an effective “go-to-gear” but choosing the right transmission with distinct and separate gear span ratio might be a better alternative while out on the trail. That being said the NV4500’s most guys are perfectly happy with gear ratios of the NV4500 with the optional use of overdrive.

Price: The NV4500 is a very popular transmission and was hailed as the best ever produced for medium and heavy duty trucks. This is the go to transmission for 4BT Swaps. Units that have been remanufactured go anywhere from $2,000-$4,000 whereas used ones will still fetch a $1000. The advent of overdrive and the addition of oversized gearboxes will drive up the price of any transmission. eBay, junk yards and rebuild shops are the most popular places to find NV4500 Transmissions.

The NV4500 is plenty of transmission for most 4WD enthusiasts. You won’t be towing large loads in a Jeep outfitted for off-roading anyways. If you are towing with a Jeep you need to get your head checked! The one advantage the NV5600 has is that it splits the NV4500s 3rd gear into two separate gears which make the tranny perfect for towing. 6 gears really isn’t necessary while out on most trails. The mid gears (4th and 5th) in the NV5600 are so close together it isn’t worth the headache unless you are towing loads and need that small incremental increase in the amount of torque when going up a hill. 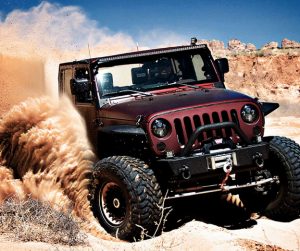 The NV4500 is a fantastic transmission for those doing any kind of swap. It is highly regarded as being durable, very adaptable to Cummins engines, fairly straightforward to install in most applications and has the torque to get the job done out on the trail. The NV4500 is not meant for large scale towing and can burn out the 5th gear if used improperly. It also has some issues with the carbon fiber synchronizers wearing out however, all around, this transmission will give you the most bang for the buck over for a Jeep Swap. Other popular options for 4BT Swaps include the ZF S5-42, FSO-6406A – Eaton/Fuller, ESO-66, G56 and TH400. Do your homework and investigate your realistic needs for the transmission versus what your ideal brand could be. Above take the time to do the transmission swap properly. Watching it come to life it's half the fun!