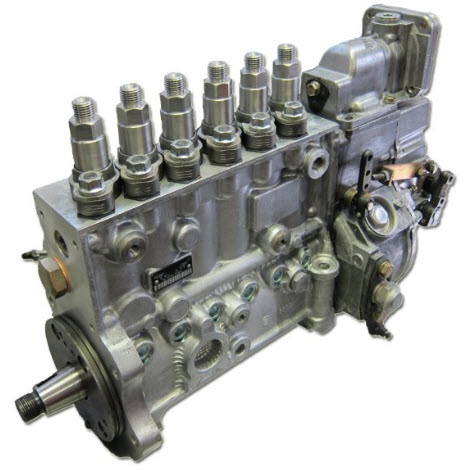 The Cummins 4BT, which debuted in 1983, is still regarded as one of the most reliable engines to ever be produced due to the simplicity of its design. The engine is almost 100% mechanical which means less moving parts than a newer electronic design. The fuel pump options available vary on design and responsiveness. This article goes into the history of the P7100 Fuel Pump and the differences between the VE and VP Designs.

Since the inception of the Cummins 4BT the company has only used 4 different types of Bosch Fuel Pumps for its B Series engines; which are popular in Dodge Trucks. From 1983-1993 the early 4BT and 5.9L engines used a VE mechanical style rotary pump then switched to the popular Bosch P7100 mechanical inline pump in 1994. Cummins produced the pump for the B Series Engines from 1994 – 1998. From late 1998 until 2002 Cummins made the big switch from mechanical pumps to electronic injection with its VP44 rotary engineered pump design. The latest Cummins Pump is the switch to the common rail injection system in 2003 with the Bosch CP3 injection system.

The P7100 pump is by far the most common and popular fuel injection pump used in the Cummins 4BT. The P7100 injection pump is engineered to be flange-mounted to the engine and works directly in conjunction with the crankshaft via the gear train. The gear train powers the pump trough a time reduction gearset system. The drive plate is the main component in the geartrain and is connected to the internal injection pump camshaft. It is important to note the P7100 has its own small camshaft outside of the camshaft of the 4BT or 5.9L. The cam acts like the brain of P7100 activating various systems within the pump. It mostly controls the critical timing components within the pump and is housed in the injection pump cambox. The cambox is the name for the lower portion of the pump that houses the camshaft, tappets and central oil sump. The camshaft, much like the camshaft in the actual engine, is supported by main bearings which allow it to “float” on a cushion of oil within the cambox. The camshaft inside the P7100 is designed to allow one distinct cam profile with a tappet lifter per engine cylinder. Each lifter is responsible for driving power to a pump element which is guided by a standard plunger and barrel application. Unlike other fuel systems, the barrel is immobile and is bored with holes in its upper portion which are exposed to the fuel-storage gallery.

To start the injection process, very low pressure diesel fuel (15 – 75 psi) is extracted from the engine fuel tank and is primed in the fuel storage/charging gallery in the pump. This is that process: The fuel is firstly metered through the barrel ports and is stopped when the plunger obstructs the opening. The plunger is pressure loaded by a spring and designed to ride the actuating cam profile which creates a constant plunger stroke allowing the right amount of fuel into the charging gallery. The P7100 uses a port-helix fuel metering system which creates constant equal pressure on in both the pumping chamber and the helical recess. 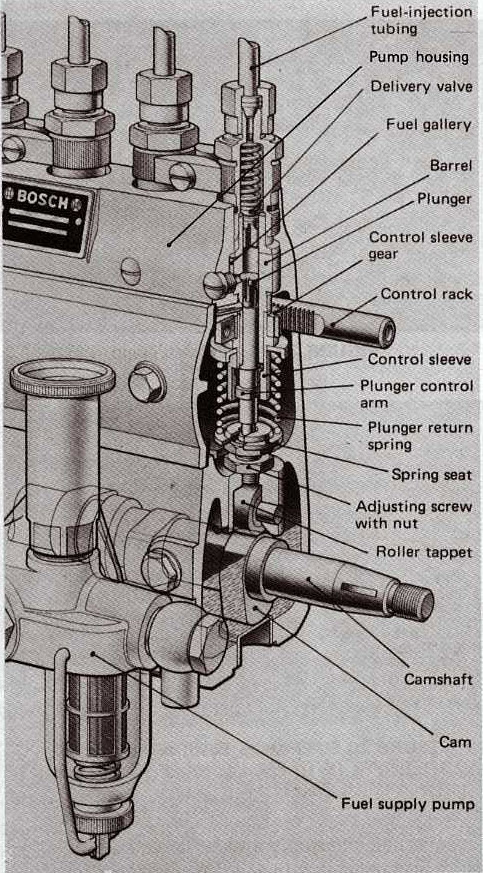 After the fuel charging gallery is primed the fuel is ready to be distributed to the injectors. Fuel delivery begins with the plunger is forced upward by the camshaft and traps off the spill port. When the spill over-port is closed pressure in the fuel chamber rises and acts to open a delivery valve within the pump. The extremely pressurized fuel then shoots through an injector fuel line transmitting fuel to the injector nozzle and then finally delivers the fuel via a pulse to the cylinder. This entire process happens within a fraction of a second when the plunger exposes the helical recess to the spill overflow port. Once the camshaft shifts position and closes the port, fuel pressure drops instantly. Undelivered fuel in the nozzle and line drops back into the fuel chamber simply because there is no pressure to open the delivery and nozzle valves. The port opening always occurs while the plunger is moving in an upward motion. This is unique in the P7100 pump as the pressure in a port-helix pump element is engineered to rise through the delivery stroke. This design is created to waste less fuel. On the downward stroke the pump produces smaller atomized droplets of fuel as the pressure drops. Once the cycle of fuel injection is completed it begins again in just a fraction of a second.

Timing is everything with the P7100. The pump must be accurately timed with the engine before usage can begin and is usually timed in conjunction with the #1 cylinder. There are three methods to timing the P7100 including the pump-spill valve, pin and the dial indicator. The pump’s port closure must be timed to a specific number of degrees on the cylinder and cannot be more than 1 degree off the crankshaft. Timing the P7100 fuel pump can be a bit tricky but an expert fuel injection technician can make performance modifications to allow more fuel flow.

• Deliver twice the fuel with a P7100 vs. VE Pump
• P7100 Pump is all around best choice for performance
• VE Pump contains a single piece piston with limited horsepower
• VE Pump gets better fuel mileage
• P7100 has a piston for every cylinder
• VE Pump is more quiet
• A marine pump will not work with on-road application
• VE Pump is much smoother for normal driving conditions
• P7100 pump starts much better in the cold due to dynamic timing and full fuel chamber
• There is no mechanical advance with the P7100. Later model VP pump replaced P7100
• No automatic shut-off with VE or P7100 pumps if a fuel line breaks. Will destroy the pump.
• 400 – 700 hp capable with P7100 Pump, about ¾ of that with VE Pump

Whether you are doing a full performance upgrade on your P7100 do some some off-roading or simply looking to replace a P7100 with a more fuel efficient VE model these pumps are very versatile and can be dialed up or down depending on your specific needs.