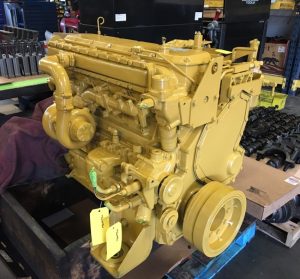 The 3116 Cat Engine is proficient at generating peak power levels of 205 horsepower at 2,400 rpm and 350 horsepower at 2,800 rpm. The Caterpillar 3116 is a turbocharged diesel engine used mainly for marine propulsion. The 3116 can work as a single unit or coupled with another for the likes of powerboats. The 3116 Caterpillar Engine is an extremely versatile engine due to its ability to work with several different Caterpillar marine transmissions that can supply different levels of acceleration. The 3116 provided the foundation for its successor the 3126, which was later replaced by the CAT C7 engine in 2003. You can’t really go wrong with a Cat engine, after all, Cat was used to power the American Virginia class nuclear submarine, which employs the Series 3512B turbocharged V-12 diesel engine…you can be sure your 3116 Cat Engine is more than just your standard engine.

Customers who are needing replace their 3116 Cat engines typically have a pretty significant reason for doing so. Over time we have pinpointed the recurring themes and issues that are often reported as the reason someone would wish to replace their Caterpillar 3116. To that end, we have assembled a list of these issues below, some of which, sadly mean the engine is at ‘the end of the road’ so to speak, but some are thankfully fixable.

There are several issues that could harm your engine, some leaving you with no choice but to replace it, and some only requiring a few new components. Furthermore, in the absence of the aforementioned instances maybe your engine is in need of a mere refreshment.  Obviously, cost, time, and availability will affect your decision making so let us inform you of the advantages and disadvantages of a new engine from the dealer.

A remanufactured Caterpillar 3116 long block would be a wise choice indeed for someone who has had the misfortune of having their engine on its last legs, more so, if there are some re-usable external parts from their old motor. It’s also a great alternative if you’re working to a budget.

Our team of experienced and dedicated machinists and engine builders will first execute a full core tear down, cleaning, inspection, and machining of the engine before it even leaves our facility. This ensures utter perfection each and every time. This also retains both our standard of quality and high level of professionalism.

Our method of remanufacturing 3116 Caterpillar Engines means they are constructed with both Reman and new parts. Although, please note, we do not recondition or refurbish old engine parts, rather, we completely rebuild the old 3116 Cat engine back to OEM specs.

To produce something worthy of what we strive for, the original components must first be in good working order. To accomplish this, every Caterpillar 3116 engine is entirely stripped. Blocks, heads, rods, crankshafts and camshafts are taken and carefully cleaned in a chemical jet wash or hot tank to get rid of any impurities that could facilitate both early component and/or engine failure.

The 3116 Cat Engine crankshafts will also be precision machined to exact tolerances, polished & magnafluxed, then thoroughly inspected by our quality control department to ensure optimum quality is maintained.

It is imperative that the final product is consistent with all modern gasket materials for the 3116 Caterpillar Engine. Therefore, the heads are resurfaced to ensure a correct sealing surface with the block and a finish compatible with modern gasket materials. Valve height is mic-d and every head is vacuum tested to assure correct valve seating.

The 3116 Caterpillar Engine blocks are meticulously inspected by magnetic particles for any cracks and imperfections. Cylinders are bored, fastened and inspected for the precise tolerances. Torque plate honing is executed on some engines to eliminate the possibilities of any cylinder head distortion, after the head is bolted and torqued to the block. This process is carried out to ensure that a major cause of engine blow-by is utterly eradicated. Block surfaces are then machined and then inspected to ensure proper finish.

Camshafts are examined and accurately machined to provide correct lift. Lobs are calculated with a micrometer to ensure OEM tolerances are met.

The Caterpillar 3116 connecting rods are thoroughly cleaned, and machined to O.E.M. specifications, before being honed to the standard diameter of original equipment to ensure the even distribution of stress on the bearings. New bushings are also fitted and machined in all bushed rods. Every rod is then carefully inspected for any bend and/or twist.

All Caterpillar 3116 long block engines will receive a number of new parts as standard. These include pistons and rings, bearings, gaskets and seals, liners. New parts assure a dependable performance and reliability from your engine. The new parts are a blend of both OEM and Aftermarket when available.

Our aim is to remanufacture your 3116 Cat Engine to the point it is as close to new as possible. The wearable parts are routinely replaced, and All 3116-core material is then inspected and examined against the original equipment specifications for the correct dimensional tolerances. Replacement parts are either new or requalified. We also mirror the exact same production processes the original equipment if new parts are required for your engine. Testing is then performed to manufacturer specifications and original production standards.

Get the FREE 10-page buyer's guide