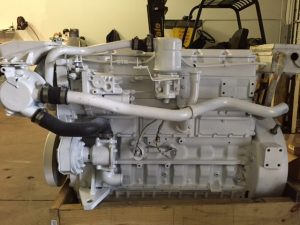 The Caterpillar 3208 is an eight-cylinder, four-stroke diesel engine with a V-8 configuration. The 3208 Cat engine was released in 1975 when Cat collaborated with Ford, the 3208 proved to be extremely popular during its production run that ceased in the early 1990’s. The very first Caterpillar 3208 engines offered 225hp with 636 cubic-inch capacity V8 design. In fact, the 3208 did not have cylinder liners which owners would answer by re-boring the blocks and fitting oversized pistons and rings instead of scrapping the engine itself. The 3208 Cat was reportedly known as a ‘throw away’ engine that the creators claimed was part of the design criteria. 1973 saw the 3208 reborn as a turbocharged version, then 1981 revamped again with more design modifications.

Caterpillar’s 3208 was frequently chosen by yacht and leisure boat owners, also larger vessels would be powered with twin turbo charged engines. However, the 3208 was known to get through quite a lot of fuel, consequently meaning it did not meet the criteria of the internal combustion exhaust emission laws which were due to come into force. Therefore, the 3208 was discontinued in 1999.

Itemized Below are a handful of engine problems and malfunctions commonly experienced by customers who wish to replace their either deceased or problematic 3208 Cat engine. Unfortunately, some of the issues listed could in fact lead to the death of your engine, but some can be alleviated if caught in time.

When it comes to the wellbeing of your engine there could be an excess of issues and mishaps, worst case scenario, you could be left with an issue where you are cornered in replacing your engine. However, some circumstances may just require you to replace some parts or components, or maybe your engine just needs a mere refreshment. Of course, cost, time, and availability will play a part in your decision making, so let us inform you of the pro’s and con’s of a new Caterpillar 3208 engine from the dealer.

A remanufactured 3208 Cat long block engine is a great replacement for someone who has been the victim of a catastrophic internal engine failure, but luckily escaped with good re-useable external components that can be salvaged from their old motor. Long blocks are also a good alternative when trying to reduce costs in when faced with such an issue.

However, it is crucial to note that all of our Caterpillar 3208 remanufactured long blocks are constructed with a combination of both reman and new parts. However, we do not just recondition or refurbish former engine parts but rather completely rebuild the old 3208 motor to OEM specs.

Firstly, every 3208 Cat engine is initially stripped. Blocks, heads, rods, crankshafts and camshafts are thoroughly cleaned in a chemical jet wash or hot tank to get rid of any impurities that could hasten both early component and engine failure.

Heads are resurfaced to ensure a proper sealing surface with the block and a finish consistent with today's new gasket materials. Valve height is mic-d and every head is vacuum tested to assure an accurate valve seating.

By using magnetic particle, the blocks are carefully inspected for cracks and defects. Cylinders are then bored, honed and inspected to precise tolerances. Torque plate honing is performed on some engines to prevent the chances of cylinder head distortion after the head is bolted and torqued to the block. This process stops a major cause of engine blow-by. Block surfaces are machined and then inspected to ensure proper finish and good quality.

Camshafts are carefully inspected and precisely machined to provide correct lift. Lobs are measured with a micrometre to make sure OEM tolerances are met.

Connecting rods are first cleaned, then machined to O.E.M. specifications prior to being honed to the standard diameter of previous equipment for the even distribution of stress on the bearings. New bushings are installed and machined in all bushed rods. Every rod is carefully inspected for bend and twist.

Our Caterpillar 3208 long block engines receive a standard set of new parts such as pistons and rings, bearings, gaskets and seals, and liners. These new parts guarantee excellent performance and consistency throughout the lifetime of the 3208 Cat. The new parts are a combination of both OEM and Aftermarket parts when available.

The definition of remanufacture, is to make as close to new as possible. Wearable parts are automatically replaced. All Caterpillar 3208 engines core materials are thoroughly inspected and examined against the original equipment specifications ensuring correct dimensional tolerances. Replacement parts are new or requalified. If new, parts are made in the same production procedures as original equipment. Testing is then carried out to manufacturer specifications and original production standards.