There is a reason Caterpillar produced this engine for a quarter of a century. The CAT 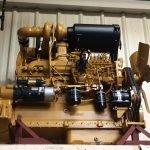 3306 engine is legendary for its simplicity, reliability, million-mile durability, and ease of serviceability. The 3306 is often overshadowed by Caterpillar’s larger 3406, but this mid-range engine is arguably one of the most tried-and-true power plants to ever wear the manufacturer’s signature yellow paint. The larger of the 3300 series of Cat engines (which included the 3304 four-cylinder), the 3306 features a 4.75-inch bore and a long, 6.00-inch stroke. Its under-square design means it shines at low rpm, which was perfect for the wide array of construction, power generation, mining, marine, line-haul, and agricultural applications it was used in. In short, the  CAT 3306 is a workhorse. While not underpowered, its power is in no way remarkable. That said, the 3306 can be run wide-open ‘round the clock in gen-set trim and last more than 20,000 hours before a major overhaul is required. On the highway, it can easily travel a million miles or more before requiring a refresh. 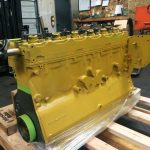 is ribbed for added strength and a cast-in, top deck cooling shelf maximizes coolant flow to the top of the liners, which extends their service life. A steel spacer plate is employed between the block and head, adding strength to the upper structure of the engine and also eliminating the need for counterbores. The two-valve cylinder head on a CAT 3306 is cast from gray iron and features a stellite coating for added heat resistance. The rotating assembly starts with a re-grindable crankshaft forged from boron steel and that has had its journals polished to decrease friction and aid bearing service life. Forged-steel connecting rods that have been hardened and shot-peened for extra strength are attached to valve-relieved, cast-aluminum pistons which are slightly elliptical in shape. This provides a more precise fit within the bores at normal operating temperatures.

Why They Last So Long

In addition to its rigid construction, Cat’s 3306 benefits from several other features that 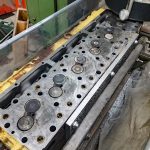 were specifically designed with ultimate longevity in mind. Offset wrist pins reduce piston slap within the cylinder liners. The liners of CAT 3306 engines are made from cast-iron and have been treated to induction hardening the full length of the liner. As for the valvetrain, each time the valves are actuated they’re rotated roughly three degrees. This is performed with the use of valve rotators and results in uniform wear for optimum sealing throughout the engine’s service life. 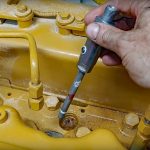 field technicians. In particular, the mechanical fuel system is easy to access, diagnose, and work on. The fuel injectors are external and can be removed without pulling the valve cover (unlike the 3406). On top of that, no special tools are required to do it. As a bonus, replacement parts remain not only readily available, but affordable for the 3306. This is due in large part to the 3306 engine’s use in so many different applications around the world. A single, fixed geometry turbocharger was all that was ever offered on turbocharged versions of the 3306.

Unlike comparable engines in the mid-range segment, the mounting location of the 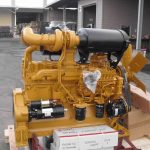 injection pump is on the exhaust side of a CAT 3306 engine rather than on the intake side. The starter is also located on the exhaust side of the engine. Accessory drives such as air compressors, power steering, and the water pump are all gear-driven (i.e. no belts to slip and no bearings to grease), and the chrome alloy front timing gears are helical in design. The 3306 engine’s oil pump (also gear-driven) is located inside the oil pan.

With a production spread of more than 25 years, inevitably there are various engine 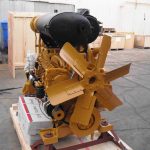 configurations and power ratings available for Cat’s 3306. However, the biggest difference lies in the two types of combustion systems offered. The 3306 is best known as a direct injection engine, but Cat offered a pre-combustion version prior to the arrival of direct injection. In a direct injection system, fuel is injected directly into the piston’s fuel bowl, where the combustion event takes place. In pre-combustion engines, fuel is injected into a small cavity within the cylinder head, with combustion beginning there and carrying downward into the cylinder beneath it. Not only are direct injection versions of the CAT 3306 engine more powerful, but they are preferred by most customers. This is primarily due to DI versions calling for 25-30 percent less cooling requirements, providing 8 to 10-percent better fuel efficiency over pre-combustion, and for offering significantly improved cold starting.

It might not have won any races, but Cat’s 3306 is fondly remembered by operators, 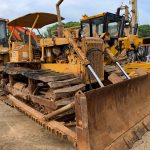 mechanics, and fleet owners alike as one of the most durable engines ever produced. Its overbuilt nature, longevity-based design, and simple mechanical injection system make it one of the most revered engines in the world. In gen-set form, 20,000 hours seems to be the norm, although many 3306’s have made it an incredible 30,000 hours without a major overhaul. In on-highway applications, a properly maintained 3306 is virtually guaranteed to see 1,000,000 miles before an overhaul. The 3306 was eventually replaced by the 3176 in the 1990s, with the 3176 later evolving into Cat’s C10 and C12 engines.

Without question, the words CAT 3306 and failure don’t belong in the same sentence. 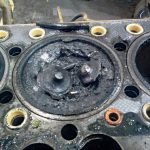 However, every engine has its shortcomings and eventual failure points. Luckily for CAT 3306 engines, most of their issues surface long after the customer has observed a sizeable return on their investment. Among the 3306 engine’s most notorious issues are: broken water pump shafts, failed or leaking front main oil seals, and dropped valves—although the latter scenario usually occurs after extremely high hours or miles have been accumulated. 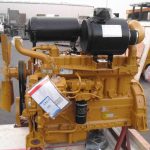 original design to give you more horsepower, improved torque, and increased fuel economy. Utilizing mostly brand-new parts and built exactly to OEM specifications (not to mention an industry-leading warranty), we build a universal higher horsepower configured Cat 3306 rated at 330 hp. Some non-wearable parts are rebuilt from core components, such as inlet and outlet connections, aftercoolers, solenoids, etc. Our aftermarket hybrid units are built to 9Y Arrangement legacy specifications. The 9Y Arrangement is an all-around great replacement candidate for more than 20 popular applications, including bulldozers, scrapers, tractors, wheel loaders, dump trucks, compactors, and rollers.

As a guide, an extended long block is approximately 75-percent of a complete engine. A Big 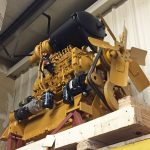 The CAT 3306 engine was first introduced in the early 1970s, and at the time served as the 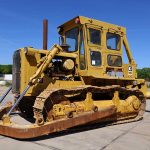 replacement for the older 1673 and 3160 model engines. The first widely-used application for the CAT 3306 came in the form of tracked excavators in 1973. It was mass produced in quantity following that and made its way into a variety of power generation, agricultural, line-haul, marine, and construction applications. Common pieces of off-highway equipment graced with the 3306 were Cat’s D6 and D7 bulldozers, its 12G, 14G, and 140G motor graders, and various rollers, scrapers, excavators, loaders, cement mixers, industrial pumps, and gen-sets. Of course, the 3306 was put to work in on-highway applications such as dump trucks, and even Class 8 trucks, from all of the major truck manufacturers (Peterbilt, Kenworth, Freightliner, etc.). Today, an engine of the 3306’s displacement and power output would never make the cut in a Class 8 truck, but back in the 1970s and 1980s the 10.5L 3306 was used in that segment of the transportation industry. The CAT 3306 was also used in vocational trucks, step vans, delivery vehicles, and even bread trucks. In the marine industry, Caterpillar’s 3306B model was a huge hit, and the CAT 3306 engines were successfully being used in countless small boats from tugs, dredges, ferries and drifters to trawlers, fireboats and pump boats.

Aspiration: Turbocharged, turbocharged and aftercooled, naturally aspirated (depending on application)