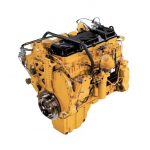 Like so many other diesel engines released at the beginning of the 21st century, Caterpillar’s C13 was an emissions-friendly replacement for a proven yet dated predecessor. In this case, the C13 was destined to replace the C12, a power plant often lauded for its fuel economy and million-mile durability. To many, the C13 never lived up to the C12 in the latter two categories. However, thanks to debuting Cat’s ACERT technology, it did meet significantly more stringent NOx emission standards that were set to go into effect in 2004—and the manufacturer was able to achieve it without the use of troublesome exhaust gas recirculation (EGR).

Available for a myriad of applications from Class 8 and medium duty trucks to power generation, mining, and construction, and with various power ratings offered (including 525 hp in motorhome form), the C13 was placed in service in virtually every sector of the economy from 2003-2010. But even though it was a cleaner-burning and more powerful engine than the C12, the C13 was plagued by emissions equipment issues—especially when the diesel particulate filter and corresponding regeneration system were introduced in 2007. More on that in a bit. 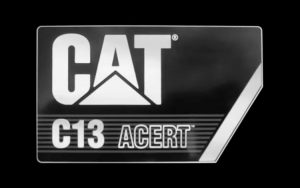 Caterpillar’s Advanced Combustion Emissions Reduction Technology, abbreviated as ACERT, was the manufacturer’s system of solutions for curbing NOx emissions, but it was intended to be adaptable for future changes. In 2003 the technology was marketed as being capable of reducing emissions (both NOx and particulate matter) at the point of combustion, rather than relying on exhaust gas recirculation (EGR) like its competitors were using. The air management side of ACERT for the C13 included sequential turbocharging (i.e. compounds), which was employed to force not only more air into the combustion chamber (remember EGR is used to lower combustion temperature in-cylinder), but denser air. Variable intake valve actuation was also utilized and worked in concert with the camshaft to further lower NOx emissions, while at the same time improving fuel efficiency.

Combustion And Aftertreatment With ACERT 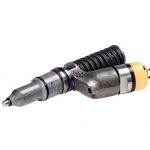 In-cylinder, multiple injection events could be accomplished on each power stroke thanks to Cat’s use of an advanced version of MEUI, or Mechanically actuated Electronically controlled Unit Injectors. With the lift pump supplying 80 to 90 psi of fuel supply pressure to the rail in the cylinder head, the camshaft actuated a rocker arm to fire off each injector, which was controlled by the ECM. The ECM also commanded variable valve actuation, which provided for optimization of the intake valve timing for improved power and fuel economy while also decreasing emissions. Downstream of the engine, a flow-through diesel oxidation catalyst (DOC) was part of the early exhaust aftertreatment equation on the C13. 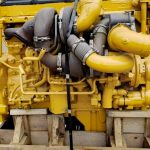 Before Cat’s ACERT technology was ready for production, a Band-Aid of sorts was implemented for the C13. To fill the gap between the end of C12 production and the C13 ACERT, “bridge engines” were offered. The backstory here is that in 1998, after having been found to have implemented engine control software that produced NOx emissions beyond allowable limits (along with other engine manufacturers), Caterpillar signed a consent decree dictating that the company would meet the 2004 emission standards (2.5 g/bhp-hr NMHC+NOx) beginning in October of 2002, 15 months ahead of the official January 1, 2004 deadline. However, Cat’s ACERT technology was not ready by the 2002 deadline, so bridge engines, which incorporated some of the components of ACERT, were sold instead.

These engines were certified above the 2.5 g/bhp-hr NMHC+NOx standard and were subjected to nonconformance penalties to the EPA. The bridge engine run was short-lived, as ACERT engines were in full production by mid-January of 2003, but (due to their lack of emissions equipment) these variants of the C13 are said to be some of the most reliable C13s around. 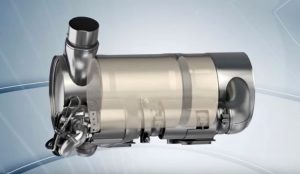 Though the early C13 ACERT engines produced from 2003-2006 were mechanically sound, in general, intake valve actuator (IVA) and precooler failures are common. However, the biggest problems in the C13 line surfaced with the 2007-2010 version (namely those with serial numbers beginning with LEE), after further emissions-scrubbing technologies had been implemented.

Among the additional emissions equipment were Clean Gas Induction (CGI), a Diesel Particulate Filter (DPF), and the Cat Regeneration System (CRS) which introduced the highly-problematic Aftertreatment Regeneration Device (ARD) head. Each of the aforementioned systems would bring its own sets of pitfalls into the fold, including (but not limited to) DPF, CRS, sensor, injector, and fuel line issues.

Believed by many to have been rushed to market in order to meet the EPA’s 2007 particulate matter emissions standard (which required engines to emit 90 percent fewer PM than was required up to 2006), the C13 “Regen Engines,” as they are often referred, were the source of all sorts of litigation and at least half a dozen proposed class-action lawsuits. 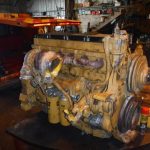 The C13 is different from most ACERT engines in the Caterpillar lineup, though it does have a fair amount in common with its C11 sibling. First, the C13 makes use of an external oil pump (different from the C15, for example). On that note, the C13 also tends to run at lower oil pressure than any other Cat engine, with 20-psi at idle being common—yet also considered to be within spec. Between the block and head, there is no spacer plate like what you’ll find on a C15, and the C13 also uses an automotive-like head gasket. As for the C13’s valvetrain, the pushrods are located in the block, with the lifters bolted on top of the deck under the cylinder head. Needless to say, if a C13 suffers a lifter failure the head must be removed in order to address it. And while not exactly being unique to the C13 (but highly welcomed), the engine is known for its containment of fluids (i.e. the C13 isn’t known to develop leaks as easily with age as most engines in its class do). Much of this is attributed to its being assembled with thick, high-quality gaskets. 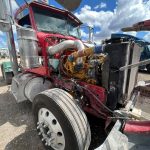 Beyond its emissions system shortcomings, like all engines, the C13 has its fair share of pattern problems. However, the biggest issues arise when the C13 overheats. Overheating a C13 often results in a cracked cylinder head, with the split typically occurring between an injector and an exhaust valve. This can result in combustion gases entering the cooling system and/or coolant infiltrating the combustion chamber, not to mention the fact that it’s a relatively expensive repair. The C13’s wet sleeve cylinder liners were also single O-ring pieces (by comparison, C15 liners incorporated three O-rings), which with age can eventually fail and allow coolant to mix with engine oil. Most of the C13 failures we see here at Big Bear Engine Company are listed below: 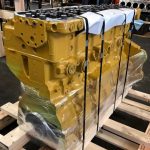 If a customer’s C13 is unfortunate enough to suffer a serious internal engine failure but at the same time is fortunate in that many of the engine’s external components can be reused, a remanufactured C13 long block is a great solution. Coincidentally, a reman long block is about as financially feasible as replacing a C13 engine gets.

To accomplish this, our team of machinists and engine builders perform a full core tear down, cleaning, inspection, and also handle all machining of the C13 before it leaves our care. This process guarantees that each engine leaves the Big Bear Engine facility in perfect running condition every time.

Of crucial note in the Cat C13 reman process is that all of our reman long blocks are built with a mixture of both remanufactured and new parts. We do not recondition or refurbish old engine parts. Instead, we comprehensively rebuild your C13 back to OEM Caterpillar specs.

In an effort to avoid the early termination of both parts and the C13 engine itself, we remove all impurities by stripping the block, head, rods, and camshaft, which are subjected to an extensive and meticulous cleaning process in a chemical jet wash or hot tank.

Factory C13 crankshafts are precision machined to exact tolerances, polished (for reduced bearing and oil resistance) and magnafluxed (to check for cracks). After that, the crankshaft is inspected by our quality control department. 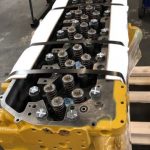 To both guarantee a proper sealing surface with the cylinder block and achieve a finish that is compatible with the latest gasket materials, the cylinder head is resurfaced after passing initial inspection. Valve height is mic’d and the head is vacuum-tested to ensure that precise valve sealing is present. 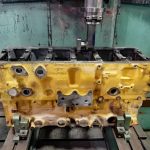 Each C13 block is carefully inspected for cracks or other signs of damage. To eliminate distortion once the cylinder head is fastened to the block, the cylinders are bored and honed to precise tolerances. This process reduces the causes of engine blow-by considerably. All block surfaces are machined and then inspected to achieve a perfect finish. 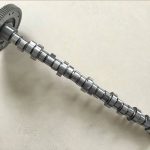 Each C13 camshaft is inspected and precisely machined to ensure it provides the correct lift. Lobes are also measured with a micrometer to make certain that all OEM tolerances are adhered to. 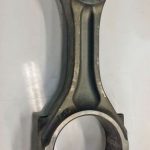 Each connecting rod is carefully analyzed for signs of bending and/or twist. From there, each C13 rod is cleaned and then machined to OEM specifications. That process is followed with each unit being honed to its usual diameter of original equipment, which provides for even distribution of stress across the rod bearing. 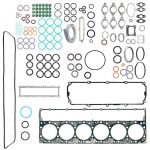 Fresh pistons and rings, bearings, wet sleeves, gaskets, and seals come standard on all reman C13 Caterpillar long blocks. These brand-new parts ensure dependable performance and reliability throughout the life of the engine. The new parts employed in a Big Bear long block are a combination of OEM and aftermarket components. 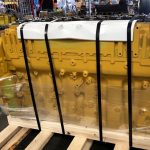 In addition, wearable parts are replaced in every single engine. All C13 Caterpillar core material is inspected and examined against the original specifications to certify correct dimensional tolerances. In the end, the goal of remanufacturing an engine is to restore it to a state that is as close to new as possible. Alternate parts are either new or requalified, and if new the parts are produced using the exact same manufacturing process(es) employed on the original engine. All testing is performed according to manufacturer specs and original production standards.

*Note: We can provide a new oil pump, oil cooler, water pump, turbos, injectors, and fuel pump for an additional cost with the long block, but these components will not come assembled to the engine.