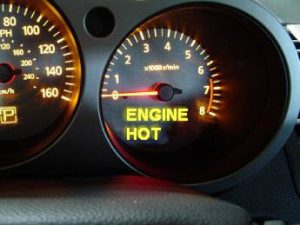 Overheating can be a serious issue within a diesel engine. It is important to not push an engine too hard under load for an extended period of time however job site conditions sometimes dictate extensive wear on the equipment. If you find your diesel engine is overheating the article below will offer some common places to diagnose the issue.

The most obvious system to inspect upon discovering overheating issue is the coolant level. If the coolant is too low this can allow pockets of air into cooling system. When air gets into the cooling system it will cause a reduction of coolant flow due to the presence of air bubbles. Air flow alone isn’t going to get the job done to keep engine temperatures constant. If you find coolant levels to be too low simply add more coolant to the engine.

Other causes of air bubbles is the deterioration of the cylinder liner. When the combustion cycle occurs it causes tremendous pressures up to 65,000 psi with in the cylinder liner. Over thousands of hours of operation, upon combustion, the liner beings to vibrate violently within the engine block injecting air back into the cooling system. These tiny bubbles can then do damage to the liner in the form of pitting (cavitation) and eventually eat away the liner all the way to the cylinder bore. These holes will allow coolant to leak into the bore and reduce coolant pressure. The addition of a supplemental coolant additive is recommended to provide a protective layer of chemical nitrates to prevent liner damage. 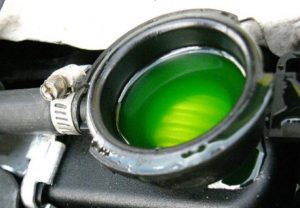 If the new coolant does not roughly match the coolant in the engine do not add the new coolant and “wing it”. It is advised to drain the current cooling system and then flush out any leftover coolant. One the system is clean refill the cooling system with the correct amount of coolant, anti-freeze and water. Overheating can occur when two different coolant mixtures reach different boiling points. Follow the engine operations manual to the letter. For example a CAT 3306 will require more coolant than say a Cummins 4BT. 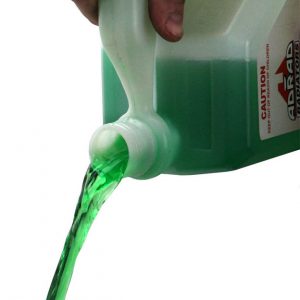 4) Check for Air in the Cooling System:

Combustion exhaust can make it way into the cooling system in a number of ways including a damaged cylinder head, cracked cylinder head gasket, liner cracks or through a dropped valve. Exhaust gas is naturally much hotter and will cause engine overheating. The loose hose clamp is something a lot of mechanics often overlook but this simple issue can allow air into the cooling system which causes a reduction in the cooling capacity of the coolant/anti-freeze mixture.

Sometimes there is absolutely nothing wrong with the internal cooling system but rather a faulty temperature gauge, sensor or thermostat. If a gauge isn’t working properly don’t immediately replace it. Temperature diagnostic systems might simply need to be re-calibrated. 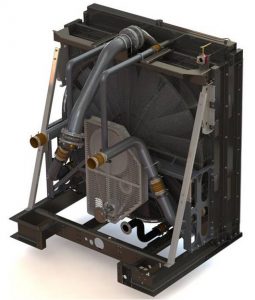 8) Inspect the Radiator for Overheating:

A.) The radiator is a prime trouble spot for cooling system issues. The radiator is prone to getting clogged with dirt and debris. Deposits and dirt can restrict the flow of coolant mixture throughout the radiator.
B.) Inspect the radiator core for debris or damage between the fins. Any sort of dirt between the fins can restrict air flow throughout the radiator core.
C.) Check the core for missing, damaged or misaligned radiator baffles. The baffles keep the temperature of the radiator down therefore any missing or damaged baffles will cause excessive heating of the air through the radiator.
D.) It is imperative that the radiator in the engine is built exactly to OEM specs. An aftermarket or rebuild that is not standard size can restrict air flow. An undersized radiator can cause overheating problems due to it not having enough surface area to release the heat properly. An improperly sized radiator will cause the engine to run at a higher than normal temperature. Normal temperature is also dependent on ambient air temperature and humidity. Each engine has a different running temperature and it is best to check your manufacturer’s guide to determine the optimal engine running temperature.

9) Inspect the Fan and Fan Shroud:

A.) The most obvious place to inspect on a diesel engine when overheating occurs is the cooling fan. Make sure the fan is installed correctly. If the fan is loose or not in the correct position air flow could be partially or completely restricted.
B.) It is best to stick with the OEM fan size. The purpose of the cooling fan is to send a calculated amount of air flow through the radiator to keep it from overheating. If the fan is too small not enough air will cool the radiator core. It is also important to make sure the fan is in the correct position to deliver air to the radiator. Something simple as the fan pointing at a downward angle can be the difference between a working engine and a $20,000 overhaul bill.
C.) The fan shroud is the housing that hold the fan blades in place. It is important the fan shroud and the baffling be the correct size and positioned correctly. Aftermarket models that don’t fit just right can allow vibrations to reverberate up the shroud and eventually crack the housing. The size of and position of the fan shroud should exactly meet OEM specifications.

If the filler cap isn’t tightly closed it can lead to a drop in the internal radiator pressure. If the overall radiator pressure is lower it can cause the boiling point of water/coolant to be less than normal it can lead to the system wide boiling of the engine cooling system. Something simple as a cap not closed can overheat and engine and ruin it. For example the radiator filler cap rated at 15 PSI will generally increase the boiling point of the coolant to 265 F ° with a 50/50 mixture of antifreeze and water. With a 70/30 mixture of antifreeze and water the boiling point increases to 277 F °. Normal operating temperature of a Caterpillar C7 for example is 180-200 F °. Each diesel engine is different but ideally the coolant boiling temperature will increase under pressure.

12) Check for Damaged or Misaligned Cooling System Hoses and Clamps:

It is common for hoses or clamps to become loose or unhinged from their respective fittings. Damaged hoses usually can be seen visually if there are any leaks in the line. If no leaks are visible it is advisable to pressure check the line with forced air. Hoses without any major leaks can soften over time and be susceptible to fraying. The soft areas of the hose can become kinked or crushed during operation and restrict coolant flow. Hoses also crack and deteriorate on the inside. Loose particles of the hose can clog or restrict coolant flow as well.

The shunt line prevents pressurized bubbles forming from the water pump, also known as cavitation, by providing a constant flow of coolant. When there is an abundance of boiled coolant in the system it pushes the coolant to the surge tank and into an overflow area called the expansion bottle or tank. The shunt line must be submerged in the expansion tank. A blockage of the shunt line from the radiator top tank to the engine water pump inlet will cause a reduction in the water pump efficiency. If the water pump is only working at half capacity it will result in low coolant flow and thus overheating of the diesel engine. 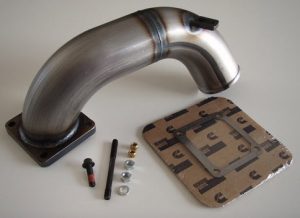 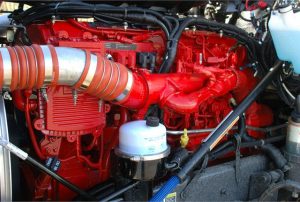 A water temperature regulator that is damaged or is malfunctioning will not open fully. If the regulator only open part way it can restrict the flow of water and coolant thus causing the engine to overheat. Replace, clean or repair the regulator if necessary.

17) Check the Water Pump for Damage:

If there is a blockage in the aftercooler it can cause engine overheating. Inspect the air to air aftercooler for dirt, debris or engine deposits that could restrict air flow. Cleaning the aftercooler is recommended as part of regularly scheduled maintenance of a diesel engine.

Air flow exiting through the radiator exits via the engine compartment. Make sure there is not a blockage in the engine compartment and that all of the associated radiator exhaust parts are not damaged. Problem areas to check include the air filters, air conditioner, hoses and valves. These parts should also be designed to OEM spec and installed correctly. 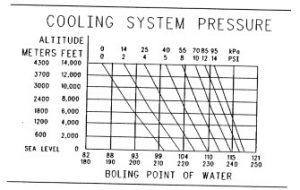 The higher an engine operates at altitude the lower the capacity of the cooling system on the overall engine. A pressurized cooling system that is large enough to keep the coolant from boiling must be used at extreme altitudes. Check the engine’s operations manual for the altitude your engine is rated at.

21) Be Aware of Outside Ambient Temperature:

22) Be Aware of Engine Lugging:

Engine lugging is a running condition in which the load applied to the engine is too large for the engine to handle. The engine will prevent an extreme amount of damage by entering into lug mode. Lug mode is when the engine RPM does not increase with an increase in fuel. This lowered RPM causes a reduction in air flow through the radiator as well as lowered coolant flow throughout the cooling system. The combination of less air and less coolant flow during high input of fuel will cause overheating of the engine. The increase in fuel will normally cause the engine to produce white smoke. Do not push the engine too hard as overheating will damage the cylinder heads as well as other internal components. 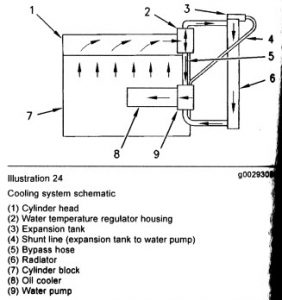 Common Engine Problems Due to Overheating

Overheating can cause a number of problems to the engine. Some of the most common problems from overheating are:

Diesel engine overheating is something to never be ignored. Keep an eye on your temperature gauges and never push your engine beyond recommend load. If you see that your diesel engine is running hot the best thing to do is shut down the engine immediately. Some electronic diesel engines will automatically switch to air-cooled at reduced power if there is a loss of coolant. This is for limp only and really should not considered a permanent solution.