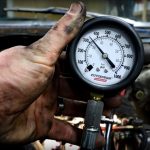 On any internal combustion engine, compression is what makes the world go ‘round. For diesel engines, where compression is often at least double what you see in a typical gasoline engine, it means everything. Not surprisingly, being down on compression means you’re down on power—and that can’t happen when you’ve got work to do. While there are various diagnostic procedures that can be performed before you tear into a suspect engine, a compression test can clue you in as to which specific cylinder is worn or damaged. Compression tests can also be useful when you’re trying to hunt down an operating issue such as a miss or excess blow-by, employed as a preventative maintenance measure anytime you’re under the valve cover(s), and can also come in handy when purchasing a used engine.

So what does the process entail? It starts with the right tools for the job: a high-pressure gauge, the correct adapter, and some basic engine knowledge. The biggest key is to keep the test procedure consistent from cylinder to cylinder. Repeatability is paramount in eliminating the kinds of variables that skew results. For our purposes below, we’re compression testing a Cummins engine—an ISB 24-valve 5.9L to be exact. However, the overall scope of testing compression is the same for all engines, diesel or gas. Only the tools required and the point of data collection are different. 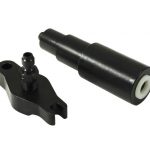 The tools required to pull off a compression test range from universal to application-specific and budget-friendly to high-dollar. There are all-inclusive compression test kits offered through OEM’s, but there are aftermarket systems, too (think Snap-On, Miller, and even Harbor Freight). For the process of running a compression test on an ISB 24-valve 5.9L Cummins (’98.5-‘02), an engine that doesn’t have glow plugs, an adapter that fits into the injector bore is mandatory. This one is made by Kastar. It comes with an adapter hold-down bracket, which can be secured via the factory injector hold-down plate bolts.

The Right Tool: A High-Pressure Gauge 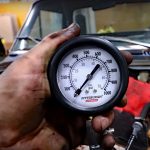 This is one key area where compression testing a diesel varies from a gasoline engine: the gauge. In most cases, you’ll need a pressure gauge that reads higher than 500 psi, and many of the units used in compression testing diesels go all the way to 1,000 psi. The unofficial minimum spec for an ISB 24-valve 5.9L Cummins is 350 psi, but as you’ll see below there is something more important than the pressure you find in each cylinder. As mentioned above, the ISB 5.9L power plants—and indeed all Cummins, 5.9L or 6.7L—have to be compression tested via the injector bores, as they are all void of glow plugs. 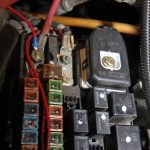 Before any compression test can take place, the fuel supply has to be disabled. In the ISB 24-valve case, this means removing the injection pump relay for the Bosch VP44, located in the power distribution center (PDC) on ’98.5-’02 Ram trucks. If the ISB Cummins engine has been equipped with an aftermarket electric lift pump, its operation must be disabled also. Eliminating both high-pressure and low-pressure fuel supply is necessary because you’ll be bumping the engine over to perform the compression test, and you don’t want it to start during the process. 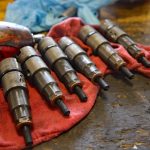 To make life easier for the batteries and starter, all fuel injectors should be removed prior to a compression test. Reducing the stress of cranking the engine over will reduce the chances of taking time off of their service life. Injectors can be labeled upon removal to ensure they go back in the same bore they came out of during reassembly. With the injectors removed, it’s also an opportune time to have them tested. At the same time, performing a compression test is ideal any time an injector test, replacement, or upgrade is performed. 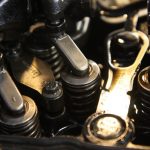 On an ISB 5.9L Cummins, the exhaust rockers have to be removed in order to access the injector hold-down shoulder bolts. The injector hold-down shoulder bolts are the fasteners with an 8mm head. A quick tip: if you’re pulling all exhaust rockers at the same time on a ’98.5-’02 Cummins or a later common-rail, keep track of which cylinder each rocker arm came off of. By returning them to the same place prior to tearing into the engine you’ll have a lot less lash adjustment work ahead of you once the compression test is complete. 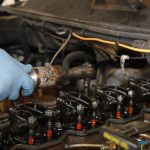 Starting at cylinder number 1, and after confirming the injector bore is free of any foreign debris, the compression test adapter is inserted into the injector bore. The factory 8mm head injector hold-down shoulder bolts are used to secure the adapter in place. Then the number 1 cylinder exhaust rocker is reinstalled. Again, if you label, arrange or keep track of which exhaust rocker came off of each cylinder, proper valve lash will still be intact. From there you can torque the rocker to spec, hook up the gauge to the adapter, and prepare to compression test the first cylinder.

Bumping The Engine Over 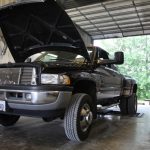 With the engine unable to fire off and start, the engine should be bumped over until the needle on the compression test gauge stops moving. Some will target a set number of revolutions such as five or 10 before stopping to keep things consistent, but the former method of allowing the gauge to tell you when the test is complete is most commonly observed. The next step is to record the pressure reading on the gauge before resetting it and moving on to the next cylinder. 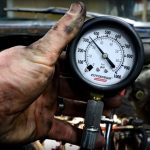 As previously mentioned, when the needle on the gauge stops moving peak compression has been obtained in that cylinder. The minimum pressure spec for a 5.9L Cummins is 350 psi, and in an ideal world, you want all cylinders to read within 10-percent of each other. As a general rule of thumb, most mechanically sound engines will build more than 400-psi per cylinder. However, finding consistency in pressure across the board is more important than focusing on a number that appears to be low.

What Pressure Is Bad News? 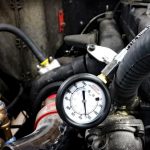 While a consistent pressure spread across all cylinders is what you’re after, a 100-psi difference between any two cylinders is a definite red flag and cause for concern. At this point, you will have pinpointed which hole is the problem, but additional testing, diagnosing, or even borescope work will be in store. Beyond that, pulling the cylinder head and physically venturing deeper into the engine would be the next course of action. 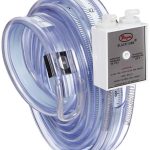 Keep in mind that specific compression numbers can vary for many reasons. Among them are lower compression engines, different, aftermarket, or low compression pistons, and faster or slower cranking speed, to name a few. All of these things can affect the results of a compression test, which is why it all comes down to making your test as repeatable as possible from cylinder-to-cylinder. On top of that, it can’t be stressed enough that the balance of pressure across each cylinder is more valuable than each hole’s specific number being normal or “low.” Lastly, it’s worth mentioning that Cummins often recommends diagnosing engine health via inches of blow-by (measured through the use of a manometer gauge, shown) over compression testing.