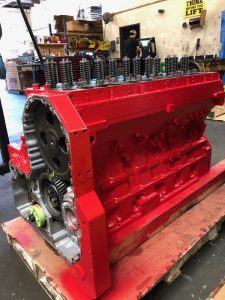 The Cummins ISM Engines is at the forefront of the heavy-duty diesel engines in its class. The ISM undergoes thorough testing to ensure it meets the high standard Cummins demand for their products. The 6-cylinder engine produces a range of horsepower from 280 – 450. The ISM previously identified as the M11 CELECT plus but earned its ‘IS’ in 1998 when it harnessed an Interact System. Each and every element of the Cummins ISM Engine is produced using the Six Sigma process that ensures a good level of quality throughout each model.

Cummins designed the M11 ISM motor with drivers in mind, therefore the ISM provides coaching and feedback of trip data to the driver to aid in efficient and comfortable driving. Adding to this, the ISM houses a Variable Geometry Turbocharger meaning a sharp throttle response and less lag that really gets your load moving.

Itemized Below are a handful of engine problems and malfunctions commonly experienced by customers who wish to replace their either deceased or problematic ISM. Regrettably, some of the issues listed could in fact lead to the death of your M11 ISM motor, but some can be remedied if caught in time. 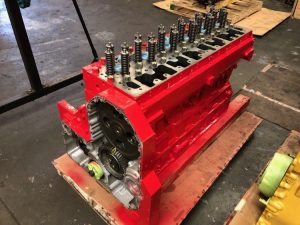 When it comes to the wellbeing of your engine there could be an excess of issues and mishaps - worst case scenario, you could be left with an issue where you are cornered into replacing your engine. However, some circumstances may just require you to replace some parts or components, or maybe your engine just needs a mere refreshment. Of course, cost, time, and availability will play a part in your decision making, so let us inform you of the pro’s and con’s of a new Cummins ISM engine from the dealer.

A remanufactured Cummins ISM long engine block is a great replacement for someone who has been the victim of a catastrophic internal engine failure, but luckily escaped with good re-useable external components that can be salvaged from their old motor. Long blocks are also a good alternative when trying to reduce costs in when faced with such an issue.

However, it is crucial to note that all of our Cummins ISM remanufactured long blocks are constructed with a combination of both reman and new parts. However, we do not recondition or refurbish former engine parts but rather completely rebuild the old ISM motor to OEM specs.

Every Cummins M11/ISM motor is initially stripped. Blocks, heads, rods, crankshafts and camshafts are thoroughly cleaned in a chemical jet wash or hot tank to get rid of any impurities that could hasten both early component and engine failure.

Heads are resurfaced to ensure a proper sealing surface with the block and a finish consistent with today's new gasket materials. Valve height is mic-d and every head is vacuum tested to assure an accurate valve seating.

Blocks naturally pick up imperfections, therefore, we use magnetic particle which carefully inspects for cracks and defects. Cylinders are then bored, honed and inspected to precise tolerances. Torque plate honing is performed on some engines to prevent the chances of cylinder head distortion after the head is bolted and torqued to the block. This process stops a major cause of engine blow-by. Block surfaces are machined and then inspected to ensure proper finish.

Camshafts are carefully inspected and precisely machined to provide correct lift. Lobs are measured with a micrometer to make sure OEM tolerances are met.

Connecting rods are cleaned, then machined to O.E.M. specifications and honed to the standard diameter of original equipment for even distribution of stress on the bearings. New bushings are fitted and machined in all bushed rods. Every rod is carefully inspected for bend and twist.

Our Cummins M11/ISM long block engines receive a standard set of new parts such as pistons and rings, bearings, gaskets and seals, and liners. These new parts guarantee excellent performance and consistency throughout the lifetime of the ISM. The new parts are a combination of both OEM and Aftermarket parts when available.

The definition of remanufacture, is to make as close to new as possible. Wearable parts are automatically replaced. All Cummins ISM engine’s core material is thoroughly inspected and examined against the original equipment specifications ensuring correct dimensional tolerances. Replacement parts are new or requalified. If new, parts are made in the same production procedures as original equipment. Testing is then carried out to manufacturer specifications and original production standards. 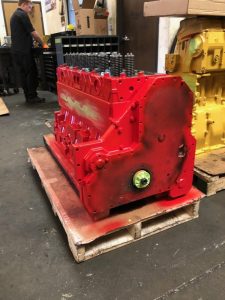 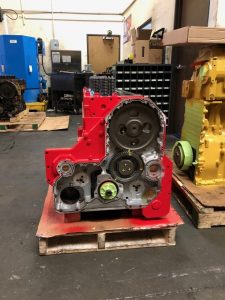