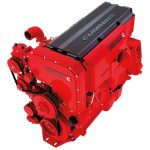 When the coveted and rock-solid reliable N14 Cummins neared the end of its production run, the global, Columbus, Indiana-based engine manufacturer launched its replacement: the ISX15. Originally referred to as the “Signature” series engine, the 912 cubic inches (14.9L) I-6 was developed with more stringent future emission standards in mind, which is one of many reasons why the ISX15 has arguably been the most reliable Class 8 diesel engine in modern times. Over the course of its 22-year production run, exhaust gas recirculation (EGR), a diesel particulate filter (DPF), and selective catalytic reduction (SCR) were all added to the ISX15, yet the engine retained its reputation for durability and even the promise of going 1 million miles before requiring an overhaul. The other part of the story is that the ISX15 built a reputation for being one of the most fuel-efficient engines in its class, and many would argue it is one of the most fuel-efficient over-the-road diesels ever produced. 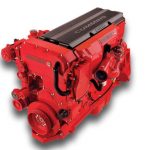 The inline-six ISX15 displaces 912ci thanks to its 5.39-inch bore and torque-friendly 6.65-inch stroke. Its block is cast from gray iron and accommodates mid-stop, wet cylinder liners, and the cylinder head is cast iron as well. As for the valvetrain, the ISX15 made use of dual overhead camshafts until ‘09, with one cam being dedicated to actuating the fuel injectors, as the early engines utilized unit injection. The second camshaft actuated the valvetrain and engine brake. Another notable way the ISX15 separated itself from the N14 it replaced was due to the fact that it featured fully electronic systems (the N14 did not). Beginning in ’10, when the unit injection was scrapped in favor of high-pressure common-rail injection (called XPI, or Xtra-High Pressure Injection by Cummins), the design of the ISX changed from DOHC to SOHC.

When Cummins revamped the ISX15 around the use of high-pressure common-rail injection, the cam lobe problems that were inherent with cam-driven unit injection systems all but ceased and the engine took a technological leap forward. The high-pressure fuel system produced injection pressures as high as 35,000 psi and utilized solenoid-actuated injectors capable of pulling off five events per combustion cycle. This added further preciseness in the process of meeting particulate matter (PM) emission standards, not to mention the injectors’ pilot injection events could be used to quiet engine noise. On the aspiration front, the ISX15 began its production run with either an Holset HX55W or HX60W (“w” for wastegate) turbocharger creating boost, both of which were fixed geometry units. Beginning in ’03, the variable geometry Holset HE551V was introduced for improved response to better meet emissions (namely PM). VGT technology took a leap forward in ’07 with the more advanced Holset HE561VE, and then once more in ’10 with the HE451VE. 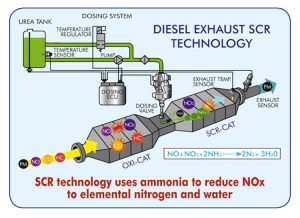 The ISX15 was forced to change with the times. Luckily, Cummins knew this ahead of time and planned accordingly, framing its ISX program around future emission standards. In 2002, it received EGR to meet the coming, more stringent federal NOx emission standard. In 2006, the ISX15 received a diesel particulate filter (DPF) in addition to EGR, the DPF being required to trap soot particles produced during combustion—which was accompanied by regeneration cycles that periodically super-heated the DPF to transform the soot buildup into a fine ash. By 2010, the EPA clamped down once again on NOx output and Cummins decided to meet the standard by equipping the ISX15 with selective catalytic reduction (SCR). SCR technology called for the use of diesel exhaust fluid (DEF) and, by working toward the same goal as the EGR system (curbing NOx), ended up allotting the EGR system a lighter workload which lent itself to improved longevity. 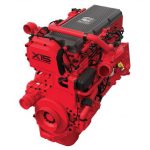 As the ISX15 design inevitably began to age, Cummins transitioned the platform into the X15, the ISX15’s replacement that was phased in starting in 2017. While mechanical, electronic, and emissions aftertreatment changes were present on the X15, it did retain the same bore and stroke, as well as a similar block, crankshaft, and connecting rods. To improve fuel efficiency, a low friction water pump, geartrain, oil pump, and pistons were all added, which helps account for the X15’s fuel economy edge over its ’10-’20 model ISX15 predecessor. Three different types of engines were also made available at the X15 launch: the Efficiency Series, Productivity Series, and a higher compression Performance Series model, which boasted an available 605 hp and 2,050 lb-ft rating. 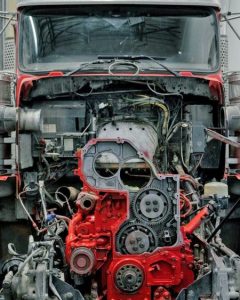 Although it’s renowned for being one of the most reliable Class 8 engines in the modern era, the ISX15 isn’t perfect. As the miles rack up it’s no different from any other heavy-duty diesel power plant, where age, wear and tear, operator abuse, and even maintenance neglect can land one in the shop—or worse. Some of the hard-part failures we encounter at Big Bear Engine Company are listed here:

When a catastrophic engine failure occurs or it’s simply time for an overhaul, our ISX remanufactured long blocks fit the bill. Quick lead times, high-quality workmanship, low cost, and a strong warranty highlight our long-block engine packages, and we can match or beat the new engine option from a dealer in almost every way.

At the outset of all Big Bear ISX remanufactured long block builds, our team of machinists and engine assemblers perform a full core tear down, cleaning, inspection, and also handle all machining of the engine before it leaves our facility. This process guarantees that each ISX leaves our care in perfect running condition every time.

It is important to note that all Big Bear ISX remanufactured long blocks are assembled using a combination of remanufactured and new parts. We do not recondition or refurbish old engine parts. Instead, we comprehensively rebuild your ISX engine back to OEM specs.

Refer to the diagram here to weigh the differences between replacing an engine through us, buying new from a dealer, going the in-frame route, or sourcing a used engine. 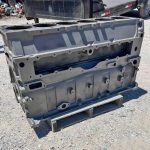 The process begins with every ISX engine undergoing complete disassembly. The block, head, crankshaft, connecting rods, and camshafts are thoroughly cleaned in a chemical jet wash or hot tank. This removes all contaminants and impurities which could lead to early components and even premature engine failure. 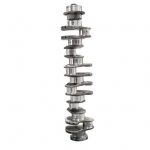 Factory ISX15 crankshafts are precision machined to exact tolerances, polished (for reduced bearing and oil resistance), and magnafluxed (to check for cracks). Then the crankshaft is thoroughly inspected by our quality control department. 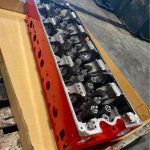 ISX cylinder heads are resurfaced to ensure a proper sealing surface with the block and that they receive a surface finish that’s compatible with today’s new gasket materials. Valve height is mic’d and each head is vacuum-tested to ensure precise valve sealing. 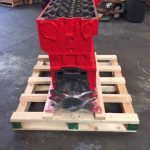 For ISX blocks, we use magnetic particles to carefully check for cracks and imperfections in the casting. If the block passes inspection, the cylinders are bored and then honed to precise tolerances. On specific engines, torque plate honing is performed, which eliminates cylinder head distortion after it’s been fastened onto the block and torqued to spec. This process drastically reduces the major cause of engine blow-by. All block surfaces are machined and then inspected to achieve a proper finish. 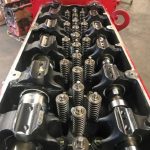 Camshaft lobe wear and rocker problems are common on DOHC ISX engines. For both DOHC and later SOHC versions, we take care to fully inspect and then precisely machine every camshaft to ensure the correct lift is achieved. Camshaft lobes are measured with a micrometer to make certain that all OEM tolerances are met. 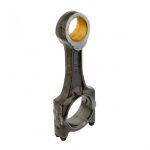 Factory connecting rods are retained but undergo an extensive reconditioning process. This includes a thorough cleaning followed by careful analysis for indications of bend and/or twist. ISX rods are then machined to OEM specifications prior to being honed to the standard diameter of original equipment for even distribution of stress across the bearings. New bushings are also installed and machined in all bushed connecting rods. 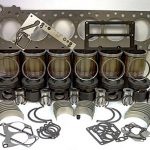 Big Bear ISX long block packages receive a standard set of fresh components such as pistons and rings, bearings, wet liners, gaskets, and seals. Brand-new parts all but guarantee consistent, reliable performance throughout the life of your engine. The new parts included in our reman long blocks consist of a combination of OEM and aftermarket components when available. 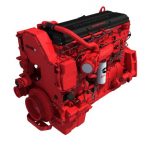 To remanufacture an engine is to make it as close to new as possible. Wearable parts are always replaced in every engine we build, and all ISX core material is closely inspected and compared with original manufacturer specifications to ensure correct dimensional tolerances. Replacement parts are either new or requalified and, if new, the parts are produced using the same manufacturing process employed for the original engine. In-house testing is also performed to manufacturer specifications and original production standards.

*Note: We can provide a new oil pump, oil cooler, water pump, turbo, injectors, and fuel pump for an additional cost(s), but these components will not come assembled to the engine.