You’re into serious and sometimes extreme off roading so what axle you have beneath your truck is pretty important. Dana have been making heavy duty axles since the late 1940s and is still today a market leader and number one choice for owners of the Jeep Wrangler JK. For off roading enthusiasts the choice often comes down to the Dana 44 or the Dana 60 - but what’s the difference between them - apart from their price?

Depending on the type of terrain the vehicle will be encountering the strength of the axle housing comes into play, it being the part that holds everything in one place. If your thing is speeding over sand dunes it’s especially important that the housing is particularly strong, though not so important if you’re doing a lot of rock crawling.

So what about the gearing and the middle section housing, which is what holds your differential, usually a locker. Now, there are so many different versions of both the 44 and the 60, as well as different gears, so we've chosen a couple of mid-range for this comparison. 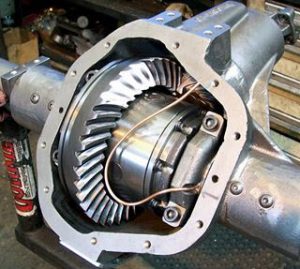 As mentioned, If you are into your rock crawling then the 60 is the more suitable, but then you may also want to consider upgrading further to the Dana 70.

Both the 44 and 60 have been around for years so if you don’t want to, or can’t afford to buy one new, the aftermarket is a good source to explore. Not just for the axles themselves but for the bits and pieces that can be used to pimp it up.

First off, our entire guide on the best axles for an off-roading vehicle is available here, it covers 20+ brands of axles and combinations. Back to the Dana 44 specifically, lets look first look at the front axle Closed-Knuckle Dana 44. This has coarse spline outer shafts and tiny U joints like Dana’s smaller counterparts. Avoid pre 71 as they have relatively weak 19 spline shafts. A rebuild kit is widely available on the net.

The Low-pinion Dana 44 has a very good cost to strength ratio and can be upgraded easily as it’s popular in the aftermarket. We've read that it’s most swapped-in axle in history. Generally found in FSJ, Ford, Dodge and GM vehicles. The 8 1/2-inch-diameter ring gear of a Low Pinion Dana 44 will give you a good tooth engagement and tooth contact plays more of a role in strength than which side of the gear the engine torque is being applied to.

Used in Ford 4 x 4s, the High-pinion Dana 44 has a stronger ring and pinion 44 gears than the above, when used in a front application. Less ratios available than the Low Pinion and is quite hard to seek out nowadays. A good swap for a full width axle with a driver-side pinion, however. Parts are plentiful on the aftermarket.

The high-pinion Rubicon Dana 44 (post 2007) has stronger tubes than the 44 axles in the previous TJ Wrangler model. It has a more robust transfer case and also offers additional rocker protection. Again, plentiful in the aftermarket.

For the back axle the Wrangler Dana 44’s axle tubes are on the small side and prone to carrier bearing failure. Doing a little research I found this quote on Four Wheeler, “There are only three types of JK Dana 44 front axles: bent ones, ones that will be bent, and those under Jeeps that will never go off road”. Despite this, they’re popular on the aftermarket.

The Aluminum Dana 44 is hard to come by which may not be a bad thing. The ‘aluminum’ refers to what the center section is made from and have been shown to break under heavy dashing and crashing, where a cast iron version would just get a small scratch. The aftermarket has come up with a lot of skid plate options to help address this, but unprotected they are a known liability.

The Non Wrangler version of the Dana 44 front axle enjoys a lot of aftermarket support in the form of optional ratios, floater kits, and aftermarket differentials for more traction. Some early models are prone to axle tube bending and weak coarse-spline shafts.

To sum up, with so many varied models on the market its best to do your research and to bear in mind what applications your vehicle will be used for. When it comes to off roading with a 4BT under the hood there isn’t one axle that suits all.