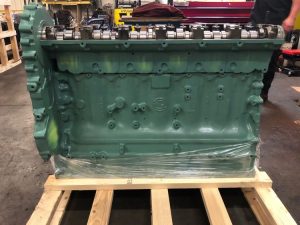 The first 60 series engine was an inline-six 4 stroke diesel engine that was made in 1987, there are three versions of the 60 series: the 11L, 12L, and 14L. The 11L became fairly popular in buses due to its efficiency and electronic control. This engine practically pioneered the existence of electronically controlled diesel engines. However, the 11L ceased in 1998, allowing the 12L to pick up from where it left off. However, despite the popularity of Both of these engines, the 12L also died out in 2007. The 14L was just as popular, especially in Freightliner trucks, but in 2011 it was discontinued and replaced by the DD15.

The 60 series was described as ahead of its time as it utilized a single overhead camshaft to operate its intake valves, exhaust valves, and fuel injector plungers. Like all engines, the 60 series also suffered some defects. A significant problem for the pre-2002 engines was defective wrist pins, these occasionally caused the piston crowns and skirts to separate, It wasn’t exactly a common problem, but it did cause some trouble.

When engines go wrong, some are fixable and some are just not worth the time and money, subsequently meaning the engine is simply no more. Listed below are some common issues we hear from customers who intend to replace their 60 series.

Unfortunately, there is an array of issues that can immobilize your engine. Some instances mean that your only option is to replace it. However, sometimes you may just need a few more parts to bring it back to life, or maybe, the engine needs a well-deserved refreshment. Of course, cost, time, and availability will dictate your decision making so let us inform you of the pros and cons of a new engine from the dealer.

To achieve this, our team of machinists and engine builders will do a full core tear down, cleaning, inspection, and machining of the engine before it leaves our facility, ensuring every engine is in good condition each and every time.

However, it is important to point out that all of our 60 series remanufactured long blocks are constructed with a mixture of both reman and new parts. We do not recondition or refurbish old engine parts, instead, we completely rebuild the old 60 series motor back to OEM specs.

In an effort to avoid the early demise of both parts and the 60 series itself, we remove all impurities by stripping the blocks, heads, rods, and camshafts which are then thoroughly cleaned in a chemical jet wash or hot tank.

To ensure a proper sealing surface with the block, and to achieve a finish compatible with recent gasket materials, the heads are resurfaced. Valve height is mic-d and every head is vacuum tested to assure correct valve seating.

Magnetic particle is used so blocks are carefully inspected for any cracks or damage. To ensure the avoidance of cylinder head distortion after the head is bolted and torqued to the block, the cylinder heads are bored and honed to precise tolerances. In turn, this eliminates a cause of engine blow-by. Block surfaces are machined and then inspected to ensure a proper finish.

Camshafts are inspected and precisely machined to provide the correct lift. Lobs are measured with a micrometer to make sure OEM tolerances are met.

New bushings are fitted and machined in all bushed rods. Every rod is carefully inspected for bend and twist. Connecting rods are cleaned, then machined to O.E.M. specifications and honed to the standard diameter of original equipment for even distribution of stress on the bearings.

New parts such as pistons and rings, bearings, gaskets and seals, and liners are all brand new as standard for our 60 Series long blocks. These new parts ensure dependable performance and reliability throughout the life of your engine. The new parts are a combination of OEM and Aftermarket when available.

Wearable parts are replaced every time, all 60 series core material is then inspected and examined against the original specifications to ensure correct dimensional tolerances. After all, the aim of remanufacturing is to make it as close to new as possible. Replacement parts are either new or requalified. If new, parts are made in the exact same production processes as the original 60 series. Testing is performed to manufacturer specifications and original production standards.

*Note: We can provide new oil pumps, oil coolers, water pumps, turbos, injectors, and fuel pumps for an additional cost with the long block but will not come assembled to the engine.