Despite the decline in skilled trades courses offered at American high schools, hundreds (if not thousands) of programs have survived the college-or-nothing craze that has swept through the country’s education system. Huntley Project High School in Worden, Montana is one such institution. Here, in a town of just 480 residents located 20 miles northeast of Billings, vocational learning is anything but extinct. Thanks to Ag Mechanics Instructor, Logan Kotar, his programs provide hands-on instruction that prepares his students for both post-secondary education and immediate job placement after they graduate. During the course of the school year, more than 100 students are taught the ins and out of everything from mechanics to auto body work and welding to Auto CAD. The school even boasts woodworking and machine shops.

With so many tools available in such a resource-rich environment, Kotar is able to take on projects both big and small. For the 2021-2022 school year he and his students embarked on a diesel engine repower of a 1993 Ford F-350. The objective was to replace the worn-out 7.3L IDI turbo V-8 with a fresh 5.9L, Cummins. For the undertaking, we at Big Bear Engine Company supplied the Ag Mechanics program with one of our 230hp 6BTAA Extended Long Blocks, a comprehensive component build that’s brand-new from oil pan to valve covers. Now, with the repowered Ford up and running we’re taking a look back at how the project progressed throughout the school year. Mechanics, machining, fabrication, and welding sum up the long list of skills that were necessary to pull it off. Perhaps most important, Huntley Project High School’s Cummins swap project proves that skilled trades courses are still alive and well in America today. 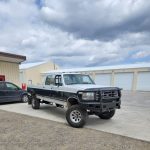 In the pickup truck realm, the term “Cummins swap” is most often associated with a 5.9L or 6.7L Cummins replacing a Power Stroke V-8 in a Ford F-250 or F-350. In this case, the truck is a Ford, but the engine being scrapped was the pre-Power Stroke, 7.3L turbo IDI from Navistar International. The truck is owned by Huntley Project High School instructor Logan Kotar and is a 1993 model year, crew cab, 4x4 F-350. So the leaf spring, Dana 60 solid front axle was already in place and rated to handle the 5.9L Cummins, along with the proven 10.25-inch Sterling axle present in the rear. Minimal electronics integration also made the swap an ideal endeavor for the Ag Mechanics program.

Though Navistar’s turbocharged 7.3L IDI V-8 was a workhorse and certainly better than the naturally aspirated version that preceded it, it’s certainly no Cummins. Back in the day, this engine produced a class-leading 190 hp, but its 388 lb-ft of torque fell short of what the 5.9L Cummins in Dodge Rams was producing at the time (400 lb-ft). And although added horsepower and torque obviously played a role in the decision to repower the F-350 with a Cummins, it was the aging IDI’s reliability issues that were beginning to wear out its owner. Logan tells us that, more than anything else, he was “tired of glow plugs,” also adding that “nothing can beat a 12-valve.”

Regardless of skill level, pulling an engine is a great way for novice and well-versed wrenchers alike to become acquainted with a vehicle. Beyond draining the fluids, removing the front core support, radiator, grille, and disconnecting the engine from the chassis and transmission, much can be learned from the removal process. During the teardown, stock can also be taken as to which components stay and which can be discarded. Logan relayed that all work was executed under his direct supervision, but that a lot of the work was performed after school and that the students stuck around to help. “Students showed up every day asking new questions about it, and they provided a lot of input on how the swap was done.”

To rule out the unknowns associated with a typically used engine, Logan made the decision early on to install a turnkey Cummins that was 100 percent ready to go. “I did tons of research, and Big Bear was the best company I came across,” he told us. “They offer comprehensive engine packages at great prices.” Settling on one of our component built reman 6BTAA 5.9L Cummins 230 HP Extended Long Blocks, Logan received an all-inclusive component build for his program. These oil pan to valve cover reman builds feature 90-percent OEM Cummins replacement parts and 10-percent aftermarket parts. It’s a long block that carries a 12-month parts replacement warranty standard, with 1 and 2-year extended parts and labor warranties also available.

Brand-New And Ready To Go The Distance 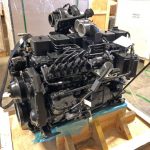 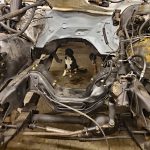 Being that the F-350 was equipped with the reputable manual ZF-5 transmission from the factory, there was no requirement to tear into an automatic and reinforce it to handle the added torque turned out by the Cummins. The specific version of the five-speed manual, the ZF S5-42, was used from ’87-’94 in Ford trucks and had a maximum torque input rating of 420 lb-ft. However, real-world examples show that the gearbox can handle much more grunt than that, especially in the absence of any abuse. With the appropriate adapter plate, solid mass flywheel, and clutch in the mix, getting power back to the Borg Warner 1356 transfer case (which was also retained) and ultimately the axles are pulled off in a reliable fashion. 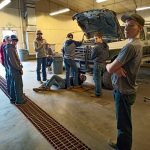 Some of the most ambitious teenagers are those willing to work with their hands, and Huntley Project High School is chock full of youngsters who aren’t afraid of blue-collar tasks. Some 120 students pass through the Ag Mechanics program every school year—a big number when you consider only 251 high schoolers attended Huntley in 2021-2022. According to Logan, in addition to the Cummins swap project, “we’ve worked on a derby car, performed oil changes, brake jobs, full-on engine rebuilds, and even sheet metal restoration.” But on top of that, students of the program toured five local businesses in the greater Billings area, with each place of business either offering internship opportunities, part-time work, or full-time jobs. It’s proof that even in high school skilled trades courses can put young adults on the fast track to successful careers. 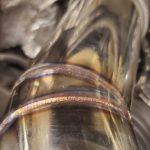 A skilled trade isn’t learned by taking online classes. It’s learned by grabbing the right tool(s) for the job and getting your hands dirty. In the automotive world, mechanics and welding often go hand-in-hand—and if you can weld (or even better, fabricate) in addition to turning a mean wrench you will quickly become invaluable to an employer. Just check out the welds that link these two sections of hot-side intercooler piping together. A minuscule hole here can lead to a huge boost pressure leak, so the weld has zero room for error. In addition to everything else on Instructor Kotar’s plate, he also teaches College Welding at Huntley—another skill put to good use on this Cummins swap project. 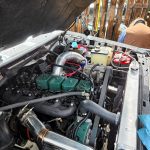 In any engine swap project, aftermarket and custom parts inevitably make it into the build. In Logan and his students’ case, a 12-valve Cummins exhaust manifold was sourced from Diesel Power Source, and it’s a piece that outflows the factory unit by 23 percent, which will help drive the turbo a bit harder. Also notice the Optima red top battery, new (polished) radiator, shop-built cold air intake, and the aforementioned hot-side intercooler pipe. Throughout the course of virtually all Cummins swaps, aftermarket upgrades, effective workarounds, and forced ingenuity infiltrate the project in one form or another.

Road-Worthy Within A Year 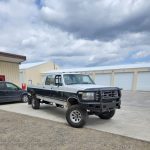 With everything buttoned up on the project, all that remains is the break-in process for the Cummins. All logistics and labor considered, Logan has more than a school year wrapped up in the endeavor. “After securing funding, we are in it a year and a couple of months,” he tells us. “But we have eight months in the project after the Extended Long Block showed up.” With 100 or more hours involved in the most well-executed Cummins swaps, that’s a pretty effective timeframe for an after-hours, high school project. We give the finished product more than a passing grade. In fact, we give it an easy A.