How To Test and Service Your Cummins Injectors 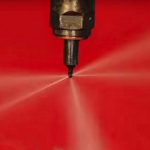 Despite how durable the mechanical fuel injectors are in the ’89-’02 5.9L Cummins engines, they’re still a wear item. That means that even though this ultra-simple, single-shot injectors are known to last 400,000 miles or more, eventually they’ll need to be serviced. Whether the owner notices a change in performance, a haze out the tailpipe, or is simply digging into the head for another reason, it’s always a good idea to have the injectors checked out. After hundreds of thousands of miles, the original Bosch injectors typically pop test 50 to 60 bar lower than they should when they finally make it onto the test bench. Many would also be shocked to learn that an injector can be noticeably out of spec within as little as 50,000 miles.

But how are mechanical Cummins injectors tested? What is a good reading? And how are they serviced to bring them back into spec? With the right test equipment, tools, and components on hand, any diesel fuel shop that’s certified to work on Bosch products will have no problem accommodating you. Below, we’ll take you through the injector pop test procedure, the injector disassembly process, the course of action during a rebuild, and also touch on the most common symptoms of injector wear. 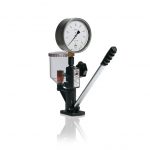 Less complex in design than a high-pressure common-rail injector tester (that’s a story for another time), many mechanical injector testers feature a simple hand pump, mechanical gauge, and a nozzle holder. Although fairly low-tech, many of these testers allow the operator to test injector opening pressure (pop-off pressure), analyze nozzle spray patterns, monitor chatter properties, and even perform a leak test. Due to the simplicity of the test, as well as the relatively low cost of a mechanical injector tester, having a set of mechanical 12-valve or ISB 24-valve 5.9L injectors tested is a highly affordable service at most independent injection shops. 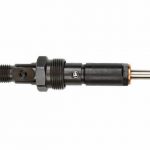 Each injector’s opening pressure is referred to as pop-off pressure. This is also why tests for mechanical injectors are often referred to as pop tests. As it pertains to the injectors found in ’89-’98 B-series 5.9L Cummins power plants in ¾-ton and 1-ton Dodge trucks, two different pop pressures were used. For first-generation engines equipped with the lower injection pressure Bosch VE distributor style pump (’89-‘93), injector pop-off pressure was set to 245 bar (3,553 psi) from the factory. On later 12-valve 5.9L’s graced with the Bosch P7100 inline pump (’94-‘98), pop-off pressure was set to 260 bar (3,770 psi). 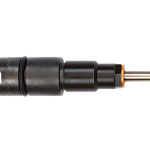 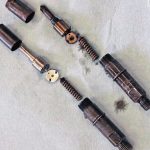 With a 12-valve injector disassembled it’s easy to see just how uncomplicated it is. From right to left on both torn down injectors depicted here, you have an injector body, shim (not shown), spring, intermediate plate, nozzle with a needle (or plunger) inside it, and the cap. However, despite having very few internal wear items, these components do have a life span, especially the injector spring. 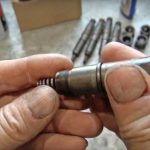 Perhaps the biggest point of wear in a mechanical Cummins injector lies in the spring. Over the course of its service life, its tension will be reduced. When the spring wears enough it begins to sag, effectively lowering the injector’s pop-off pressure in the process. A lower pop-off pressure inevitably leads to reduced in-cylinder injection pressure, less atomization, and more smoke observed at the tailpipe. And, being that the injector now pops off at a lower pressure, it carries with it a minor effect on injection timing. 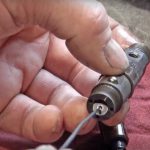 As mentioned above, the injector shims reside above the injector spring assembly. They are known to sometimes stick inside the injector and require coaxing via a hook or pick during removal. To lower, raise, reset, or fine-tune the injector’s pop-off pressure, different thickness shims can be tried and even combined. In the course of many mechanical injector rebuilds, different thickness shims are employed from injector to injector to achieve the end goal: injectors that all pop-off at the same pressure (or as close to it as possible). During a pop-test or “reset” as it’s sometimes known, the springs are often shimmed to put them back within the factory pop-off spec. 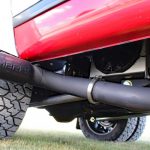 While outright injector failure is extremely rare in any 5.9L Cummins offered from ’89-’02, with high miles most units are considerably out of spec. Pop-off tests performed on injectors with several hundred thousand miles on them usually return a bar rating of 50 to 60 (580 psi to 725 psi) lower than they should. While not always noticeable due to the slow wear rate, this type of pressure drop will lower efficiency, hinder performance, and lead to increased smoke levels. Most worn injector spring scenarios yield a noticeable haze at the tailpipe. 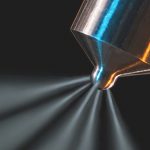 In cases where the injector’s needle (or plunger) has become worn, a pop test will expose what’s known as injector drip, or nozzle drip. When a worn needle is no longer able to re-seat itself following an injection event, excess fuel will continue to dribble out of the nozzle. Leaks can also occur on the return side of the injector, which can lead to engine performance issues (namely stumbling or hesitation). If there is a leak on the return circuit when the needle lifts to inject (and bypass the return fuel) the inconsistent pressure on the return side will cause the nozzle needle to bounce, hence the stumble. 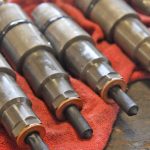 Any time a worn spring is causing an injector to pop off prematurely, a slight increase in injection timing is occurring. With the injector sending fuel out the nozzle sooner, this influences emissions (again, in the form of increased haze or smoke leaving the exhaust system) and can alter engine performance. On higher mile engines, nozzle orifice wear becomes a point of interest. Over time, the passages in the nozzles can expand, the larger holes most notably leading to lower atomization and increased emissions. Nozzle replacement is a relatively affordable option during a mechanical injector overhaul. 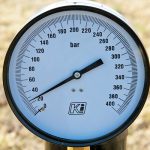 A gauge that reads between 0 and 400 bar (0 to 5,800 psi) is typical of most mechanical injector testers. And while pop-off pressure is the primary means of testing a mechanical injector, the nozzle, the spray pattern leaving the nozzle, and uniform flow across the entire set of injectors can’t be overlooked. Once again, proper shimming of each spring is done to bring all injectors within the same spec tolerance. For a bit of parting advice: Always balance your injectors as a complete set whenever possible.