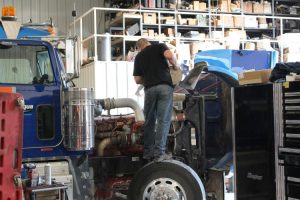 Even in the world of heavy-duty, industrial-strength diesel engines, the occasional repair and complete rebuild are inevitable. No matter what kind of precise maintenance regimen the end-user adheres to, the wear items within an engine have a life expectancy—and eventually they run their course. But when the time comes to dig in beneath the valve cover, the extent of the rebuild must first be determined. Once that happens, the terms “in-frame” and “overhaul” (or “out-of-frame overhaul”) enter the picture. In general, in-frame is just as it sounds, with the necessary repairs being performed without removing the engine from the vehicle. The word overhaul (or complete overhaul or full rebuild) usually indicates that an out-of-frame engine repair is required.

Because simply buying a brand-new engine from the original manufacturer is rarely a cost-effective proposition, the engine rebuild business is a huge part of the industry. To make repairs easier, those in the remanufacturing sector offer both in-frame rebuild kits and complete engine overhaul kits. In addition to those options, we at Capital Reman Exchange also remanufacture a wide array of medium and heavy-duty engines from the ground up. Below, we’ll help define the differences between in-frame and overhaul kits, along with conveying what parts and components are typically included in them. We’ll also point out the kinds of machining practices that should be employed during a rebuild.

How To Know Which Type Of Rebuild You Need 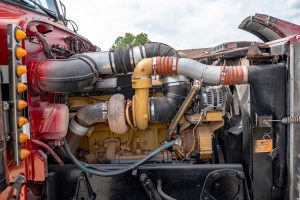 When it comes to in-frame vs. overhaul (out-of-frame) repairs, the latter is a bit more involved. For this reason, less replacement parts and components are included with an in-frame kit. In-frame repairs assume that the front cover and crankshaft won’t be removed, hence the omission of a new front cover gasket, and front and rear main seals. By contrast, a complete, out-of-frame overhaul will call for a total engine teardown. An out-of-frame overhaul is usually required when a hard part fails (such as a connecting rod, crankshaft, or dropped valve seat), causing extensive engine damage. Other times, it’s because the engine has been left in service too long and a simpler in-frame or re-bore job won’t suffice to get the customer up and running again.

Although in-frame rebuilds are carried out following engine failures (provided they aren’t catastrophic), they are often thought of as a preventative maintenance measure. And even though it’s fairly extensive to pull the cylinder head and dive into the crankcase to do an in-frame, this limited form of repair (or maintenance)—where items such as the cylinder liners, pistons, and piston rings are replaced—can save you thousands of dollars down the road. Crankshafts, the crankcase itself, and connecting rods typically last longer than any other moving component within a medium or heavy-duty engine, so providing a new cylinder for a replacement piston to live in provides a cost-effective, fresh start for this higher wear component.

What To Expect In An In-Frame Kit 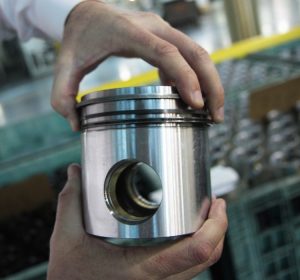 The major parts of an in-frame rebuild kit include cylinder liners and OEM-spec replacement pistons, along with piston rings, pins, and pin retainers. Most cylinder liners (also known as sleeves) are made from centrifugal cast ductile iron, have been induction hardened, and are pressed in and out of the block. Replacement crankshaft main bearings and connecting rod bearings are also supplied in most comprehensive in-frame kits.

In-Frame Kits: All The Rest Of It 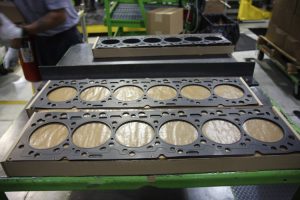 Even with the engine mounted in the frame of the vehicle, it will obviously still be accessed from both the top and bottom in an in-frame job (namely for the main bearings and rod bearings). This is why in-frame rebuild kits offer an oil pan gasket in addition to what’s known as an upper gasket set. A typical upper gasket set will include the head gasket (shown here), intake manifold gasket, exhaust manifold gaskets, a turbine inlet flange gasket for the turbo, and various other seals and O-rings, but might also include new injector seals, a thermostat housing gasket, and even electrical connector seals. 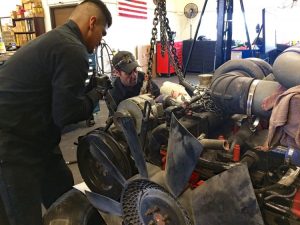 In addition to pulling the engine, the list of things to do expands tremendously for an overhaul (out-of-frame) job. The upside to this more expensive, more laborious rebuild option is that the block, head, and virtually every OEM component can be thoroughly inspected, and then addressed if a problem is found. Barring any destructive hard-part failure, the crankcase is usually salvageable, and the same goes for the crankshaft and connecting rods.

What To Expect In An Overhaul Kit 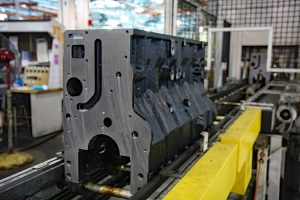 Building on what you’ll find in an in-frame kit, a complete overhaul system will add a lower gasket set, and every other gasket, seal, or O-ring the engine will need. But before that, a full teardown of the engine and deep-clean of all of its salvageable pieces has to be performed. With those steps completed, individual components can be tested and inspected, followed by a combination of reconditioned and brand-new parts being used to put the engine back together. 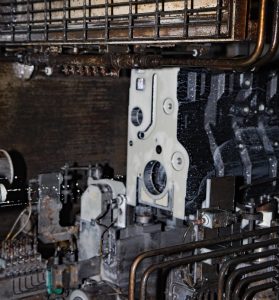 Everything starts with the block and crankshaft. As for how we treat core blocks here at Capital Reman Exchange, each candidate undergoes an in-depth, 12-step machining process. However, it all begins with a comprehensive cleaning to remove any buildup of oil, grime, grease, and corrosion. The entire crankcase is magnafluxed and then carefully examined under UV-A lighting. This is vital in catching cracks or other potential structural issues before moving forward with the overhaul. From there, we check the condition of each cylinder via micrometer, the block’s line bore for straightness, its surface and deck height, the upper and lower sleeves, and then gather the appropriate parts for the rebuild.

Restore The Crankshaft To OEM Specs, Or Better 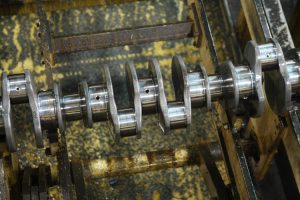 Arguably the single most important part of any engine is its crankshaft. We understand that well at Capital Reman Exchange, which is why each core is run through a 25-step remanufacturing process before we put our stamp of approval on it—including a nationwide warranty. Like blocks, crankshafts undergo an industrial cleaning, followed by magnaflux and a series of inspections. Prior to any machine work, the crankshaft’s counterweights are checked for tightness, we check the hardness of the journals and mains, inspect the keyway, nose, bolt bores, and even seal the surface when non-conformities are found. Then the crankshaft is checked for straightness—and if straightening is required it goes back to magnaflux afterward to ensure optimal structural integrity. Other key points in the 25-point remanufacturing process include micro-polishing of all thrust bearing surfaces, chamfering oil passages for improved lubrication, thermal coating for corrosion prevention, and shot-peening for additional hardness. 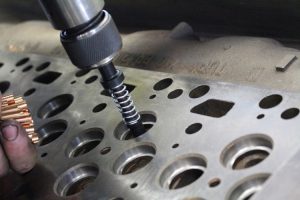 Even if you’re only performing an in-frame, have the cylinder head checked out while it’s off the block. The last thing you want to do is spend thousands of dollars only to reinstall a cracked head or a head with a questionable valve seat. Here at Capital Reman Exchange, we often address cracks in a cylinder head’s casting, repair damaged exhaust manifold stud holes, and perform valve seat and/or guide replacement. This same mentality goes for various other components, too. For example, it’s never wise to skimp on lower-cost insurance items such as getting the fuel injectors tested while they’re out, or having the turbocharger checked for end play, new seals, and (if it’s of the variable geometry variety) cleaned while it’s off. The more thorough you are with the rebuild during the engine’s downtime, the more profitable you’ll be during its uptime.

Support For Any Engine, From Start To Finish 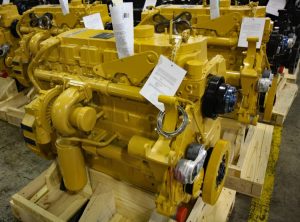 Be it Class 8, construction equipment, or agricultural applications, at Capital Reman Exchange we offer comprehensive in-frame and overhaul kits for a wide range of medium, heavy, and off-highway engines. Whether your project calls for a CAT, Mack, John Deere, International, Perkins, Detroit, Komatsu, or Cummins rebuild, we can get you the parts you need. In addition to that, our full-service, state-of-the-art machine shop and highly capable remanufacturing facility can perform all the work for a fraction of the cost of the OEM.