How does an internal combustion engine work? 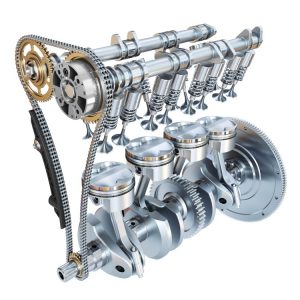 Let’s go a bit deeper than the usual “suck, squeeze, bang, blow” spiel you usually get. Combustion, also known as just burning, is the chemical process of producing energy from a mixture of fuel and air. The clue is in the name, in an internal combustion engine the ignition and combustion take place internally, in a combustion chamber, while a portion of the burned gases forms part of the new combustion cycle. The engine then converts the energy produced by the combustion to keep the wheels turning.

In essence, an internal combustion engine converts the thermal energy from the burning of the air and fuel into mechanical energy. When you hear someone talk about strokes, commonly when discussing dirt or motorbikes, relates to how many strokes it takes the piston to complete a full combustion cycle. I.e., a 2-stroke motorbike is described as such as it takes 2 strokes for the piston to complete the cycle.

Let’s take a look at the individual components and how they work: The cylinder head normally contains the camshafts, valve buckets, valves, valve return springs, spark/glow plugs, and injectors for direct injection engines. The cooling liquid also runs through the cylinder head to help regulate the temperate of the engine. Within the engine block, itself is the piston, connecting rod, and crankshaft. The piston follows a route inside the cylinder, from bottom dead center to top dead center. The movement of the piston is what creates the combustion chamber, for instance, it is the space created between the piston, cylinder head, and engine block when the piston approaches the top dead center.

Now you may have to use your imagination to understand the next bit. When the camshaft rotates it is synchronized with the rotation of the crankshaft via a toothed belt or chain. The position of both the intake and exhaust valves must be synced with the position of the piston down to the last millisecond to allow the combustion cycles to work properly. 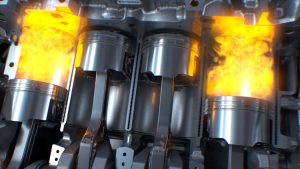 A start to finish engine cycle for a four-stroke internal combustion engine is as follows:

Now we have the basics out the way, we can have a look as to what is happening in each stroke (When the piston goes from bottom dead center to top).

This stroke begins with the piston at the top dead center. Both the intake and exhaust valves remain closed. The air-fuel mix combustion occurs at the end of the compression stroke, which creates a great amount of pressure within the cylinder. This pressure causes the piston to move downward, toward the bottom dead center. It is only during this stroke that energy is created.

As you can see from the previous steps, the piston must make four strokes to have a complete combustion cycle. (one engine cycle means two complete rotations of the crankshaft).

I’m guessing you already have some preconceived ideas about how efficient combustion engines are and I’m guessing it’s that they are not efficient at all. As it happens, you are completely right, they are enormously inefficient. Most diesel engines are below 50% thermal efficiency. You may be wondering how this is calculated, fear not, we have you covered. Basically, for an engine with 50% thermal efficiency; of every gallon of diesel used by that engine, half of the energy created is turned into mechanical energy. For example, for the standard diesel engines commonly seen in pickup trucks, only half of the energy created by that engine actually propels the truck.

Now, if you think that’s bad, wait until we tell you about gas-powered vehicles… (you may want to sit down for this)

I know it may seem that engines converting a mere 50% of the thermal energy into mechanical energy isn’t the best option considering the state of our environment, but you’ll be freighted to learn that a lot of road vehicles only convert about 20%, wasting a whopping 80% of that thermal energy. More often than not, these offending engines are usually gasoline. That’s right, so if you are an owner of a gasoline vehicle, I’m sure you’ll be delighted to know that around 80% of that precious energy is making a run for it out of your exhaust pipe.

The determining factors of the efficiency or inefficiency of an engine fall down to the laws of thermodynamics. To put this simply, it boils down to the difference in temperature between fuel combustion, the engine, and the external surrounding air.

When it comes to the longevity of an engine there is an array of factors that will determine how long it will last. To name a few, the age of the engine might make it less durable, the terrain on which you frequent will most definitely affect it, (if you live in the middle of nowhere and have to do some serious off-roading just to get a pint of milk then your engine will probably be short-lived due to the everyday stress.) On the other hand, if you only tend to use nice smooth roads it will probably last you a good while.

The type of vehicle you have will also be a determining factor. Usually, heavy-duty trucks won’t outlive smaller cars, but a lot of it comes down to how well you maintain your engine. If you adhere to the advised maintenance, take it for the required services, and repair as and when needed then you can make it go the distance.

As we know, there is no hard and fast rule when it comes to determining how long your engine will last. Not long ago it was thought that the life span of a car would be around 150,000 miles or eight years. Yet, as technology progresses, and producers create better designs, the life expectancy has climbed from 150,000 up to 200,000 miles, or ten years.

Now, the previous section may indicate that engines are fragile beings, and how imperative it is to take care of your engine. Not to mention the fact it is commonly advised that the engine must be warmed up, protected from temperature shocks, and given time to cool off before you go yanking the keys from the ignition. However, it appears that the act of nannying your engine is being left in the past, because some designers are taking an alternative approach, by literally beating their engines within an inch of their lives. I’m not just talking about testing them how a negligent owner may treat them, I’m talking about methods so heinous they make 10 years in Vorkuta Gulag look like afternoon tea in the Ritz.

Ladies and gentlemen, I present to you Ford’s global thermal test. (Reader discretion is advised) Let's take a look at just a few of the terrifying tests these engines have to endure. Just picture this, a brand-new engine straight off the production line, now imagine some sadistic engineers taking that work of art, running it up to peak power, until the water temp is around 230 degrees Fahrenheit, before suddenly shutting it off and blasting minus 22-degree coolant through it for a quarter of an hour. Poor engine, but it doesn’t stop there. The engine is then covered in frost, left to idle for half a minute, before being revved to its power peak rpm until the temp is back up at 230 again; causing the oil to go from 5 degrees to more than 280. This process is then repeated again and again for about five cycles. As bad as all these sounds, it is worse than you think. This isn’t just done once, but to complete the entire durability test, the engine will endure 350 such cycles with some additional stress tests to complement. As bad as this sounds, it is necessary. Anyway, those responsible probably get their comeuppance in fuel costs.

How does an electronic engine work? 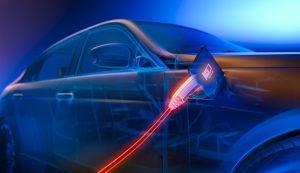 As you may have already guessed, it all begins with the battery that connects to the motor. The battery supplies energy to the stator. Within the stator are coils made from conducting wire that is situated on opposite sides of the stator, acting sort of like magnets. So, when the electrical energy produced by the battery is passed to the motor, the coils produce a rotating magnetic field that pulls the conducting rods sitting outside of the rotor along behind it. It is this spinning rotor that produces the mechanical energy needed to propel the vehicle.

However, in your usual internal combustion engine propelled vehicle, you will see an engine and an alternator, so the battery powers the engine, which then powers the gears and wheels. This rotation from the wheels then powers the alternator which recharges the battery. Hence why when you jump or bump-start your car, you need to drive it around for a short while.

So, without an alternator, how are electric car batteries recharging? Well… it’s because the motor is acting as both the alternator and motor. Just to recap before we proceed, the battery starts the motor, which is giving energy to the gears, which subsequently turns the wheels. All this is happening while you have the accelerator depressed, but what happens when your foot isn’t on the accelerator?

A quick google search will tell you that electric cars are far more energy-efficient than internal combustion engines, with electric cars at 85-90% efficient and internal combustions at 17-21%. So, on the surface, electrical cars seem preferable. Yet, it is not quite that simple because electricity is created in coal, oil, or gas-fired power plants, so combustion is indeed part of electrical cars in some twisted roundabout way. When discussing internal combustion engines, we learned that their thermal efficiency was about 50% for a diesel engine. But what’s the thermal efficiency of the coal-fired power plant powering these cars?

Does this mean that internal combustion engines are more efficient? Honestly, I don’t know and this is getting pretty complicated, so instead of trying to calculate every factor that goes into powering these vehicles, let’s just stick with electric cars are more efficient.

Just like your phone, electric car batteries will ensure cycles of discharge (when you drive the car) and charge (when you plug it in to charge). Having to do this time and time again slowly decreases the amount of charge the batters can hold. Effectively this will reduce both the range and the time taken between each journey to charge. The majority of manufacturers give a 5–8-year warranty on their batteries, but presently it is estimated that an electric car betters will be good for around 10 – 20 years before a replacement is needed.

You’re probably wondering if an electric car will need as much maintenance as one with an internal combustion engine? Despite the first electric car being invented in 1884, the technology is still relatively new, and people don’t seem to know much about how reliable they are. From pistons to belts, it is the moving parts of an internal combustion engine that usually fail, which only highlights the benefit of owning an electric car…its engine has no moving parts! So, you can bet you’ll save some money with the lack of moving parts if you decide to invest in one of these electric cars, but just like any vehicle, things such as wheels and brakes will continue to sniff around your hard-earned savings.

But let us look at the things that can go wrong: