Outer Limits: How Much Horsepower Can The 6BT Cummins Handle? 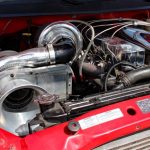 For years, the 6BT Cummins has been the hot-rod engine of choice for many in the diesel pickup game. It might’ve left the factory rated at a docile 160 to 215 horsepower between the years of 1989 to 1998, but enthusiasts have proven time and again that those numbers can be quadrupled without even digging into the short-block, or performing a whole lot of top-end work. The 6BT Cummins’ immense threshold for pain is perhaps this iconic inline’s biggest claim to fame. Thanks to a combination of near-endless performance potential trapped inside its mechanical injection system, the durability of its burly forged-steel and cast-iron components, and the simplicity of its I-6 and 12-valve design, the 5.9L Cummins can support major horsepower, and do so in reliable fashion.

But exactly how much horsepower can the 6BT Cummins support? Or rather, how much abuse can it handle before a major hard-part failure occurs? Below, we’ll discuss the 6BT’s structural limits in terms of horsepower and torque numbers, but also the components that limit additional power from being made in the first place. We’ll also touch on the kinds of engine building practices that keep the OEM block alive at more than 2,000 lb-ft of torque, the factory connecting rods inside the block at more than 5,000 rpm, and the head from lifting under triple-digit boost pressure. The following information affirms why the 6BT remains one of the most popular engine platforms in diesel performance. 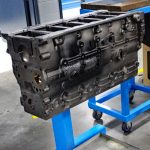 During its production run, the 6BT Cummins’ gray-iron, non-sleeved, deep-skirt block was cast in Brazil (TUPY), Mexico, and even by International here in the states. The blocks cast by the latter manufacturer are said to have been the strongest ever produced, due to their higher nickel content. Back before the 6.7L Cummins’ Siamese bore block became the go-to crankcase in the diesel performance world, 5.9L blocks with concrete-filled water jackets and OEM-based crankshafts (reinforced via girdle) were the norm. In high horsepower, race-only type applications, the 6BT block has proven capable of standing up to 1,400 to 1,500 hp so long as torque output is kept below 2,500 lb-ft (usually accomplished with high-rpm operation). Somewhere around 1,500 horsepower, the block is on borrowed time and may eventually crack.

You’ll find a lot of components that fail before the crankshaft in the 6BT Cummins. The forged-steel, 125-pound piece features seven main bearings, and main bearing caps secured by 14mm diameter bolts in ’89-’97.5 engines. Each connecting rod the crankshaft spins enjoys its own dedicated rod journal, and its rod and main journals were treated to induction hardening from the factory. In high rpm applications that required a better rod-to-stroke ratio, the 5.9L crankshaft is still employed in 6.7L blocks with frequency today. 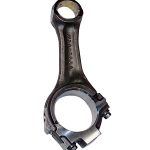 One of the most impressive hard parts in the 6BT Cummins is its forged-steel connecting rods. The I-beam units can handle 1,000 hp with ease, and significantly more than that in racing applications. In fact, a set of shot-peened, micro-polished, and balanced factory rods can hold up to more than 1,400 horsepower before bending. Subjecting factory-based rods to this type of environment is almost always done in single turbo applications, where the engine’s peak horsepower is made above 4,000 rpm. High engine speed is the best way to avoid the kind of rod-bending cylinder pressure (i.e. torque) that a 6BT can create under big load and at low rpm.

Rod Bolts: The Number One Weak-Link In The Rotating Assembly 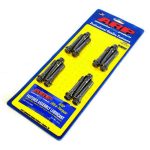 Although the factory connecting rods can easily handle 1,000 horsepower or more, stronger rod bolts are generally recommended at 800 hp. At higher horsepower, elevated rpm, and with age, the factory 7/16-inch diameter rod bolts become a formidable liability. Luckily, the popular aftermarket rod bolts from ARP (produced using its proprietary ARP 2000 alloy) are more than 20-percent stronger than the OEM fasteners, and at just $160 they afford horsepower-hungry 6BT Cummins owners tremendous peace of mind.

Pistons Nearly As Tough As The Factory Rods

Cast-aluminum direct injection pistons attach to the small end of the I-beam connecting rods via sizeable 1.57-inch diameter floating wrist pins. While the 6BT’s OEM pistons don’t enjoy the same indestructible reputation the connecting rods do, they can still survive four-digit horsepower so long as they aren’t exposed to excessive heat or cylinder pressure. The versions employed in non-intercooled versions of the 5.9L (’89-’91) are said to be some of the strongest ever used in the 6BT, primarily because they were designed to tolerate more heat. Still, we’ve seen a handful of ’94-’98 Dodge Rams with 200,000-mile factory pistons in the mix handle 1,000rwhp on the chassis dyno. In competition trim 5.9L’s, 12:1 compression pistons with deep valve pockets and that’ve been treated to dry-film lubricant and thermal barrier coatings are commonplace, and available from names such as Diamond Racing Pistons, Ross Racing Pistons, and Arias Pistons (shown).

Uncorked, The 12-Valve Head Has A Boatload of Potential

The 6BT’s cast-iron, 12-valve crossflow cylinder head moves just 140 cfm of air per cylinder on the intake side in factory form. However, despite the immense restriction, with enough fueling and turbocharger(s) in the mix, it can still support 700 horsepower. CNC porting, bigger valves, and hardened valve seats are very common upgrades, and 12-valve heads that’ve been opened up can lead to significantly more horsepower while requiring less boost (i.e. aiding engine longevity). The 6BT’s factory valvetrain will tolerate more rpm than the 2,400 to 2,700 rpm the OE-prepped injection pump governs them to, but stiffer valve springs should always be added before the engine sees 3,500 rpm or higher. 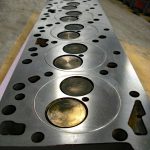 With a head design that calls for six fasteners per cylinder, the 6BT Cummins has zero head gasket issues when coping with higher boost, drive, and combustion pressure. In fact, the factory head bolts can handle 40, 50, and even 60-psi worth of boost—and we’ve even seen un-stretched bolts that’ve been re-torqued (to approximately 125 ft-lbs) handle 80-psi of boost without culminating in a blown head gasket. For big horsepower builds, a 6BT block and head is sometimes machined to accept larger, 14mm diameter head fasteners (and studs rather than bolts). When 14mm head studs are combined with fire-rings (shown), the odds of popping a head gasket, even at triple-digit boost, are slim-to-none.

Gateway To Big Horsepower: The P7100 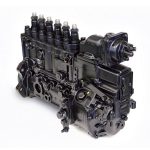 For seekers of serious horsepower, the P7100 (a.k.a. P-pump) is the only way to go. Though the rotary Bosch VE pump found on ’89-’93 6BT mills can support as much as 500 horsepower when highly modified, a worked-over version of the Bosch P7100 can facilitate three times that. Even the 160hp version of the P7100, the least coveted of the bunch (found on ’94-’95 engines backed by the 47RH automatic transmission), can support north of 700 horsepower without upgrading to larger plungers. Once larger plungers and barrels such as 13mm or 14mm units are brought into the fold (for reference: stock plungers are 12mm), along with a custom grind cam, an Ag governor for high rpm fueling, and crazy timing advance, the sky is the limit. These purpose-built, competition pumps are anything but street-friendly, but can support well north of 1,500 hp. 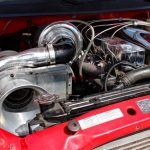 In high-horsepower, street-driven 6BT applications, compound turbo arrangements are common. Unlike the 6.7L Cummins, which brought a longer stroke and obviously more displacement to the table, low-rpm drivability often suffers when the 5.9L Cummins is tasked with spooling a large single turbocharger. To get the best of both worlds (quick spool-up and solid top-end power), a 62mm to 69mm turbo such as an S300 frame BorgWarner is typically installed on the exhaust manifold, while a considerably larger, 75mm to 82mm turbo S400 frame BorgWarner serves at the low-pressure (atmosphere) charger.

While an upsized single turbocharger can suffice on a daily-driven 6BT Cummins, big horsepower and drivability only go hand-in-hand to a certain point. When drivability isn’t as much of a concern as making horsepower is, such as in drag racing, truck pulling, or chassis dyno competition, a large single turbo makes a lot of sense. Not only is a single turbo easier on the engine (due to its producing less boost and drive pressure than a compound configuration would), but a sizeable lone charger will require elevated rpm to keep it in its efficiency range. And as we mentioned earlier, at higher rpm the kind of torque levels that bend rods and crack blocks can be avoided without sacrificing horsepower.