It’s no secret that considerable horsepower potential lies within the 4BT and especially the 6BT Cummins platforms. With a few simple hand tools, either the rotary or highly-desired inline plunger pump (P-pump) can be tweaked to provide the engine with significantly more fueling. In the case of a 6BT equipped with a P7100, the factory horsepower level can be doubled without having to upgrade the turbocharger. A similar result can be found on a P7100-graced 4BT Cummins packing the OEM turbo. However, while the Cummins’ new, richer fuel-to-air ratio culminates in added performance, higher exhaust gas temperature is the unwanted—and potentially damaging—side-effect. Will the added heat kill your engine? Not if you install a means of keeping an eye on it. It’s time to protect your investment with proper parameter monitoring. 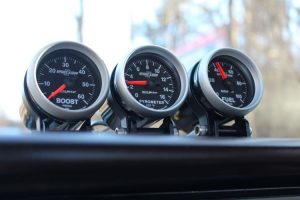 By far, the most important gauge you need in any diesel application is a pyrometer. A pyrometer allows you to monitor exhaust gas temperature (EGT)—EGT being the measurement that clues you in as to how much heat is being generated in-cylinder during the combustion process. But EGT isn’t the only temperature parameter you need to know. Engine coolant doesn’t coincide with EGT, and you definitely don’t want to warp your head or blow the head gasket, so always make sure the dummy water temp gauge on the dash is functioning properly and accurately or install an aftermarket alternative. And because added fueling leads to more boost, a boost pressure gauge should also be installed as a way of keeping both the turbo and the head gasket alive. For more on how these crucial instruments can save your engine, keep reading.

EGT Is Your Worst Enemy 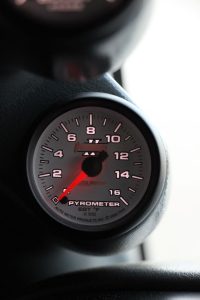 In order to ensure your engine’s exhaust gas temperature (EGT) stays in a safe range, you first have to be able to monitor it. This is why it can’t be overstated how important a pyrometer is for your Cummins, or any diesel engine for that matter. Through the use of a thermocouple installed in the engine’s exhaust tract (more on where in a minute), a pyrometer relays a real-time Fahrenheit temperature back to the driver. Whether you’re towing with your 4BT or 6BT, chasing a horsepower number, or putting one through its paces off road, you need to know what kind of EGT the engine is seeing. If you add only one gauge to your diesel-powered vehicle, make sure a pyrometer is the one you choose.

Where To Monitor EGT 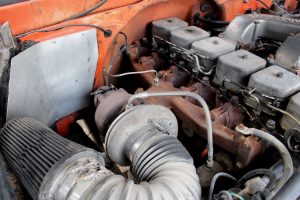 When you dumb it down, the EGT number you’re trying to obtain needs to come from a location that’s as close to the heat source as possible. This is precisely why installing a pyrometer’s thermocouple as close as you can to the cylinders is ideal. In 4BT and 6BT applications (and indeed, most diesel applications), this means it should be positioned in the exhaust manifold. Short of installing individual sensors to collect readings from each cylinder, a single thermocouple mounted in the center of the exhaust manifold (pre turbine inlet) is the most affordable and simplest path to obtaining the information we want to know. Installing a quality thermocouple in this fashion has proven very accurate over the years in 4BT and 6BT applications, and is the most broadly accepted way of obtaining EGT data in the aftermarket.

How Hot Is Too Hot? (A Loaded Question…) 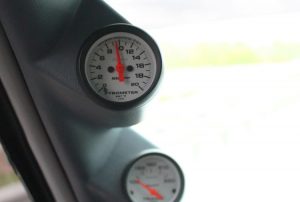 Most analog-style pyrometers provide feedback in a range of 0-1,600 or 0-2,000 degrees F. And while different engines have different thresholds for pain (i.e. heat), the 4BT and 6BT Cummins’ prefer to see no more than 1,250 to 1,300 degrees F for extended periods of time. As with any engine, brief periods of more than 1,300 degrees are tolerable, but should not be sustained for more than 10 or 20-second intervals. As a general rule of thumb, a pyrometer will read 300 to 400 degrees F at idle. While steady-state cruising and unladen, expect to see 650 to 800 degrees F. When towing, the needle can register anywhere from 800 to 1,200 degrees F, depending on the load you’re moving, the size of the trailer and cargo, the speed you’re maintaining, and the modifications you’ve performed on the engine. 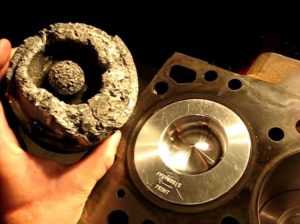 This is the type of catastrophic failure that can happen when an engine is exposed to excessive EGT for prolonged periods of time: a melted piston. Turning up the fuel on a mechanically-injected Cummins and not knowing what kind of EGT the engine is seeing can spell disaster. As with any piston failure, things can snowball quickly if the rings exit their respective grooves or the ring lands themselves melt, damaging the cylinder wall and the cylinder head. Turbocharger failure can also occur due to excessive EGT, but in the case of the 4BT and 6BT Cummins the pistons are the weakest link (thankfully, the induction hardened valve seats in the head above them are known to tolerate excessive EGT very well). The fact that piston failure typically happens before turbocharger failure on these engines may be a testament to how tough the turbos are. After all, the Holset HX25 on the 4BT and the Holset HX35 commonly found on the 6BT can live at boost pressures higher than twice the factory operating level. 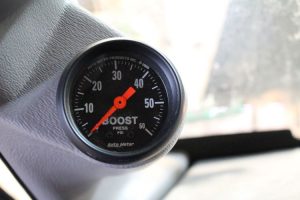 It’s not as important as a pyrometer, but a boost pressure gauge should be on your list if you’ve cranked up the Cummins’ fueling and don’t want to pop the head gasket. A boost pressure gauge should also be installed if you’ve disabled the turbocharger’s wastegate, as climbing boost can allow drive pressure to get out of hand. When a turbo’s compressor gets way out of its map, the turbo edges closer and closer to the over-speed zone (i.e. catastrophic failure). Knowing how much boost the turbo is producing can give you a rough idea of the kind of drive pressure the turbo is producing, too (keep in mind that a healthy drive pressure to boost ratio is 1.5:1 or less on most fixed geometry turbochargers). As a bonus, a boost gauge can also help you solve a boost leak or even a fueling issue.

How Much Boost Is Too Much? (Another Loaded Question…) 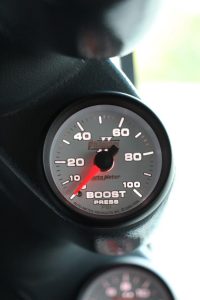 Let’s face it, the head gasket in a 300,000-mile engine might not live at 35-psi of boost, especially if it’s lived an abused life already, but there are generally accepted thresholds for boost with the 4BT and 6BT engines. For your turbo’s sake, your head gasket’s sake, and your wallet’s sake, keep boost below 45 psi on the factory head bolts and head gasket. Should you venture into replacing the 4BT or 6BT’s head bolts with head studs, the head gasket will survive making considerably more boost. For applications that see 70 psi of boost or more, machining the cylinder head, block, or both to accept fire-rings should be on the table. 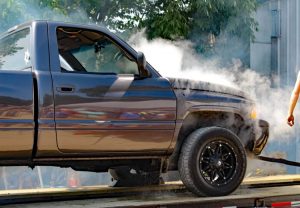 Images like these not only illustrate why you should keep tabs on boost pressure but also why it’s so important to spec the right turbocharger for your specific application. Go too small and you risk over-speeding the turbo, the engine will see a lot of drive pressure (unnecessary stress), and the fueling may never clean up at the tailpipe. Go too large and you’ll have turbo lag, high EGT at low engine speed, and disappointing drivability. Here, the owner threw copious amounts of fuel at his 6BT Cummins and the 250,000-mile head gasket succumbed to elevated boost and drive pressure.

Coolant Temp Can Be A Killer 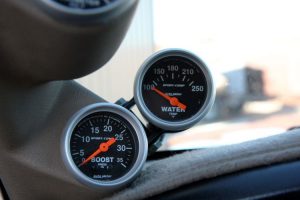 Whatever vehicle you’re in, be it an ’89-’98 Dodge ¾-ton pickup or a 4BT-powered Jeep, make sure a working water temp gauge is present. And just because EGT and boost look OK, don’t let your guard down. Especially in the case where the Cummins is being lugged uphill in Overdrive and at low rpm, a lack of coolant flow can manifest itself in the form of sky-rocketing water temp even though EGT and boost levels appear normal. We’ve seen the latter scenario play out on multiple occasions when the conditions were right.

The Damage From Repeated Overheating 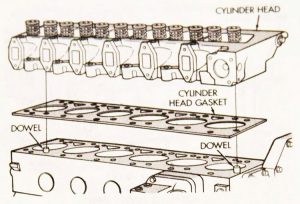 This is one of many reasons it’s vital to have a working or aftermarket water temp gauge in whatever Cummins-powered vehicle you’re driving. If you don’t, you might find yourself performing this extensive procedure. Perhaps more importantly, never put off head gasket replacement. If you push coolant to its boiling point over and over again, eventually you’re going to warp the cylinder head. If neglected long enough, the head may not even be salvageable when it’s time to address the head gasket.

No Shortage Of Aftermarket Gauges, Or Uses 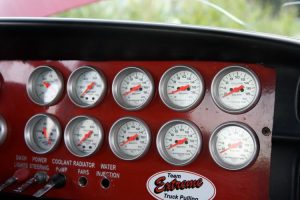 Individual analog gauges, of both the mechanical and digital variety, have long been popular in the diesel aftermarket—especially on older diesels. Companies like GlowShift, Auto Meter, Isspro and Banks Power offer 2-1/16-inch (52mm) diameter gauges and corresponding gauge pods for A-pillar, dash, and even steering column mounting solutions. Most even offer a comprehensive Cummins gauge kit for your specific needs.