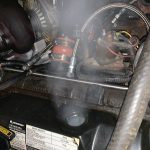 Blow-by is a term that tends to worry the average internal combustion engine owner. It’s the result of combustion pressure and gases leaking into an engine’s crankcase—and it is often associated with engine failure. However, it may surprise many to learn that every engine produces some amount of blow-by. And it’s equally important to remember that an engine that gets worked hard is going to have more blow-by than an engine leading a lighter-duty lifestyle. Case in point, a diesel engine that spends most of its time under tremendous load is going to yield significantly more blow-by than the four-cylinder under the hood of the average commuter car. But the diesel may rack up ten times the miles before an overhaul is necessary.

The point is that blow-by isn’t necessarily a bad thing. Only when it becomes “excessive” do you need to worry. But how much blow-by is too much? And is blow-by the best indicator of engine damage? Observed on an engine that’s well on its way to failure, the amount of visible blow-by will be obvious. In other instances, it’s not as cut-and-dried. Before condemning an engine to death based on a visual of the blow by its producing, other tests can be performed—and should be conducted in many instances. These procedures include the compression and leak-down variety, the rarer yet useful manometer test, an oil analysis, and even a vacuum leak inspection.

Below, we’re using the ISB 24-valve 5.9L Cummins for our blow-by diagnosis and testing examples. However, the same tips for checking for blow-by—along with the methods used for testing and diagnosing a potential problem—can be applied to virtually any engine.

What Is Blow By—And What Causes It? 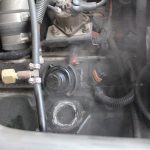 As stated, blow-by is the inevitable leakage of combustion pressure and gases into the engine’s crankcase, and even the most mechanically sound, perfectly healthy engines produce blow-by to some degree. Worn or damaged components such as piston rings, ring grooves, and scuffed cylinder walls will provide for increased cylinder pressure making it into the crankcase, which translates into an increased blow-by. Other issues that contribute to higher levels of blow-by include: leaky fuel injectors, worn valve guides, and—in the case of the ISB 24-valve 5.9L Cummins—even a vacuum leak. We’ll explain how wear and tear within the cylinder head, as well as why a simple vacuum leak, leads to blow-by later on in this piece. 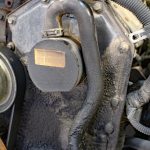 To keep the crankcase from becoming pressurized (which would lead to oil sealing and power loss issues, to name a few), blow by has to be vented. Older engines, manufactured when emission regulations were more lax, featured open crankcase ventilation systems. Today, all late-model, on-highway engines make use of a closed crankcase ventilation (CCV) system. Also known as positive crankcase ventilation (PCV), in these closed-loop systems, blow-by vapors pass through a breather before being routed back into the intake, instead of simply being allowed to vent to the atmosphere. On the ISB 24-valve 5.9L Cummins, an open-loop system is employed, although blow-by vapors are routed through a crankcase breather (or catch can/bottle) intended to trap oil particles and other debris before vapors are allowed to leave the crankcase.

The Driveway Blow By Test 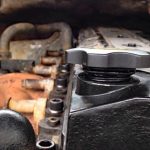 You’ve likely heard of the oil cap trick, the most common means for the layman to check blow-by. It is in no way scientific, but it is the first step most mechanics take when diagnosing a crankcase pressure problem. With the engine warmed up and running, remove the oil fill cap, turn it upside down, and set it over the oil fill hole in the valve cover (full disclosure: you can also simply unthread the cap and leave it loose over the oil fill port). If the cap jumps up and down or blows off, it’s generally accepted that the engine is producing excess blow-by. However, this simple, DIY test should never be the conclusive evidence you use to justify a full-on engine overhaul.

Not All Blow-By Is Created Equal 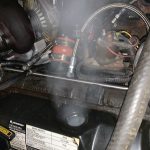 When performing the oil cap blow by test, it’s important to remember that this is just a visual inspection. On most engines, you will see oil vapor leaving the engine. A steady, yet very light haze is normal. In cases where a damaged cylinder wall, piston, or broken piston ring is causing extensive crankcase pressure, the amount of blow-by leaving the valve cover will be unmistakable. More importantly, an in-cylinder failure won’t typically produce a steady haze of blow-by. Rather, separate puffs of blow-by will be noticeable each time the damaged cylinder experiences its combustion event. Additionally, if you find that the oil dipstick tube has been blown out, you’ve likely got major engine trouble. 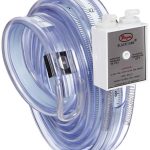 If excess crankcase pressure is suspected, there are several tests that can be performed before a complete engine teardown is in store. One is called the manometer test. A manometer is an instrument (in the form of a U-shaped tube) that uses a column of liquid to measure pressure. Conversion charts exist for converting water to inches, which tell you exactly what you’re looking at for blow-by—and whether or not the engine is worn or healthy based on the measurement. A simple device, a manometer can be homebuilt or purchased—but the test itself requires a dyno (engine or chassis) to achieve the most accurate results. 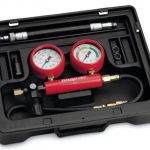 Both of these tests are designed to measure cylinder pressure in order to diagnose an engine problem. For a compression test, the fuel injector is removed (or glow plug, if applicable), one cylinder at a time, and the compression tester is inserted into the injector bore, followed by cranking the engine over (five to eight revolutions). In a leak-down test, the tester is also inserted into the injector bore, but the engine is turned over by hand until that specific cylinder’s piston is brought to TDC (top dead center). From there, compressed air is used to obtain the in-cylinder pressure reading. Both tests can be time-consuming, and both require a precise, repeatable process in order to achieve accurate results. Are they the end-all, be-all answer for finding the source of an excessive blow-by issue? Absolutely not. For example, something as subtle as low battery voltage or a weak starter can skew a compression test’s results. 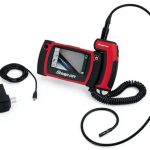 Another means of tracking down the cause of excessive blow-by is through the use of a borescope. Without having to dig into an engine based on suspected damage, a borescope can give you a visual inspection of the pistons, rings, cylinder walls, and many other areas beneath the valve cover(s). Today’s automotive borescope options are as state-of-the-art as they’ve ever been, with superior illumination, stability control, and high resolution, color still shot image functionality built into them. For their ability to either confirm or disprove the cause of engine trouble (potentially saving thousands in labor and parts costs), borescope tools have long played an important role in engine repair and diagnosis. 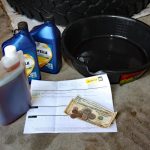 For an in-depth look at your engine’s lifeblood, an oil analysis can be highly revealing. This is a cost-effective way to monitor how your engine is performing, but it can also clue you in as to what type of failure your engine may slowly be enduring. For instance, discovering iron, chromium, or aluminum on the wear metals side of an oil analysis data sheet could mean the pistons or piston rings are worn or breaking down. As for the oil condition portion of the analysis, an elevated percent fuel content reading could highlight a leaking injector—a problem that will cause excessive blow-by but won’t be detectable by a compression, leak-down, or borescope test. 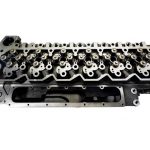 Unfortunately, blow-by can come from a number of hard-to-diagnose sources. When it comes to worn cylinder heads, each of the tests outlined above (aside from an oil analysis potentially detecting a worn metal from the valvetrain) won’t be able to pinpoint a leaky valve guide. However, an unsealed valve guide will allow boost and drive pressure to infiltrate the crankcase—a scenario that won’t show up in a compression test. In the case of the ISB 5.9L Cummins, it’s not uncommon for the cast-iron 24-valve cylinder head to have blow-by-producing wear by the 300,000-mile mark—even though the short-block beneath it is practically still brand-new. Discovering that the head is the cause of extensive blow-by on your Cummins can save you the trouble (and cost) of performing a complete overhaul.

Vacuum Leaks: The Curve Ball That Leads To Blow-By 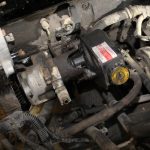 A common and somewhat puzzling problem that’s more specific to Dodge Ram applications equipped with the ISB 5.9L Cummins is the effect a vacuum leak has on blow-by. A vacuum leak or disconnected vacuum hose increases the Cummins’ blow-by considerably. This is due to the vacuum pump working harder, forcing more air into the crankcase. A vacuum-related issue in ’98.5-’02 Dodge Ram 2500/3500 trucks is also known to cause a loss of cruise control functionality, an HVAC system that defaults to the defrost setting and a front axle that won’t engage on 4x4 models.