VE Pump Versus P-Pump: Inside The Most Popular 4BT and 6BT Cummins Injection Pumps 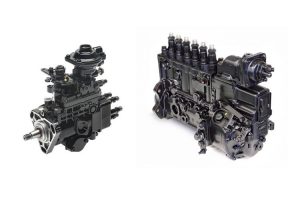 Distributor style vs. individual plunger, VE pump versus P-pump (P7100). This is a common comparison for anyone new to the 4BT or 6BT Cummins game. The truth is that both engines have employed versions of either Bosch injection pump over the years. As for the 4BT, the VE pump is highly common. On the 6BT, it’s more of a toss-up, with the VE coming standard in Cummins-powered Dodge trucks from ’89-’93, and then getting the P7100 from ’94-’98. In either application, 4BT or 6BT, the P7100 is often thought of as the Holy Grail by gearheads and performance enthusiasts. But if you don’t intend to chase horsepower with your Cummins project, is the P7100 really better?

Maybe the more fitting question is: which injection pump is right for you? Although different in design, both operate 100-percent mechanically and enjoy top-shelf durability. And while the VE pump can’t support the kind of power the P7100 will, it can easily be hot-rodded enough to wake up a sleepy 4BT or 6BT. In fact, either injection pump can be tweaked for higher fuel flow with a few simple hand tools. For more on that, along with how each injection pump operates, keep scrolling. 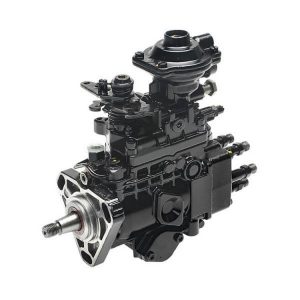 Called a distributor style pump, the Bosch VE is an axial-piston injection pump that differs from the P7100 is several ways, but one key distinguishing feature is its use of a single fuel metering plunger vs. the P-pump’s six (or four on a 4BT). While the 4BT version of the VE feeds diesel to four cylinders and the 6BT version obviously supplied fuel to half a dozen cylinders, either version looks very similar (not the case with the 4BT P7100 vs. 6BT P7100). As mentioned, the VE was employed on the 6BT installed in Dodge trucks from ’89-’93, but debuted much earlier than that. Both VE-pumped 4BT and 6BT Cummins mills had been in service throughout the mid-to-late 1980s in bread vans, skid steers, gen-sets, loaders, farm tractors, and even marine applications.

How The VE Works 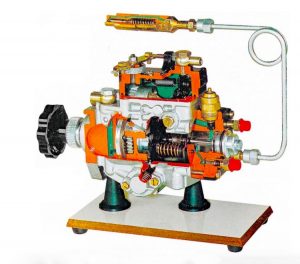 The Bosch VE utilizes a vane-style supply pump to help pull fuel from the tank, which increases with engine speed. Its lone fuel metering plunger, receiving the fuel sent to it courtesy of the vane supply pump, creates the injection pressure that is ultimately sent to the injectors. In addition to being in charge of pressurizing the fuel, the metering plunger also dictates injection timing. Six individual delivery valves (four if a 4BT) are located within the VE pump body itself, each one being linked to its dedicated fuel injector in the engine’s cylinder head. In many applications, injection timing is mechanically advanced by as much as 5 degrees while the engine is idling to aid in cold-weather warm-up. 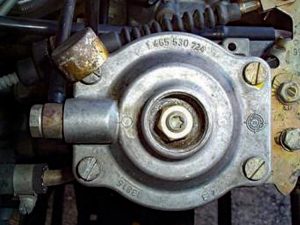 There are several ways to squeeze more performance out of the VE pump without spending a dime. The most common method is adjusting the maximum fuel screw (also known as the smoke screw), which introduces fuel sooner in the rpm range to help with low engine speed and low boost drivability. The simplest of VE mods, it calls for a pair of small screwdrivers, a 13mm socket, a T-25 Torx socket, and requires removal of the small cap on the top of the fuel control device to access the T-25 Torx screw and 13mm lock nut. Tip: two full clockwise turns of the screw are safe, more than three may be too far. Digging deeper into the top of the VE, a star wheel adjustment under the air-fuel control (AFC) diaphragm increases the pump’s fuel delivery rate under boost, and a full power adjustment (made at the rear of the pump) is typically performed by the average tinkerer. 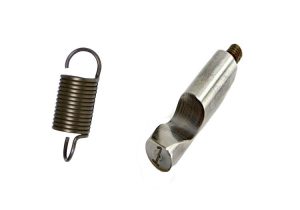 Breaking out the wallet, an aftermarket fuel pin (also called a fuel cone, pictured on the right) with an aggressive profile can bring more fuel into the equation as boost pressure begins to build. And a higher rpm governor spring will allow you to capitalize on the fueling mods listed above. From the factory, both the VE-equipped 4BT and 6BT engines were governed at very low rpm (roughly 2,500 rpm). Worse yet, they usually start to de-fuel 200 to 300 rpm before their governed speed. By replacing the VE’s factory governor spring with a 3,200-rpm spring, the engine’s power curve is broadened and more peak horsepower can be achieved. Eventually however, those seeking more horsepower will realize that the VE is both fuel and rpm limited—and its design doesn’t lend itself to competing with the P7100 when all-out performance in the end goal. 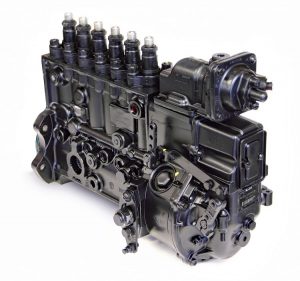 Most know the Bosch P7100 for its use in the familiar ’94-’98 Dodge Ram 2500 and 3500’s, but it was also bolted to the side of dozens of other I-6 power plants over the years, not to mention that a four-cylinder version was also produced (along with an 8-cylinder one). Various cam profiles and horsepower ratings were available with these pumps, ranging from 160 hp to 215 hp on the 6BT 5.9L Cummins alone. In road-going applications, the P7100 replaced the VE injection pump for its ability to better meet emission regulations. Specifically, the higher injection pressure the P7100 provided made it possible for Cummins and Dodge to meet the more stringent particulate matter regulations that went into effect on January 1, 1994. 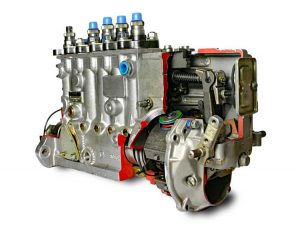 Like the Bosch VE, the P7100 is 100-percent mechanically controlled. However, its design and overall size is very different in comparison. There are six individual plunger and barrel assemblies (four if a 4BT), with each one serving its own dedicated fuel injector. The P7100’s camshaft determines the firing order. As the camshaft rotates, its lobes drive the 12mm diameter plungers up and down in their respective barrels, with the plungers producing the injection pressure that’s sent out to the fuel injectors after passing through the pump’s delivery valves. Along with dwarfing the VE pump in size, the P7100 conceals more internal moving parts. 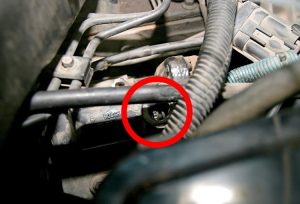 When working with a P7100, it’s possible to unlock as much as 100 hp in a 6BT application using nothing but simple hand tools (along with manipulating or disabling the turbocharger’s wastegate). These freebie mods include sliding the AFC housing on the pump fully forward to increase the P7100’s fueling rate at low boost. Removing the pump’s fuel plate completely, which increases rack travel, has been known to gain 30 to 40 hp on its own. Backing out the pre-boost screw to bring fueling in at lower engine speed is known to provide a noticeable bump in low-rpm torque, and performing the star wheel adjustment (circled above) on the top of the AFC housing opens the fuel rack even further. 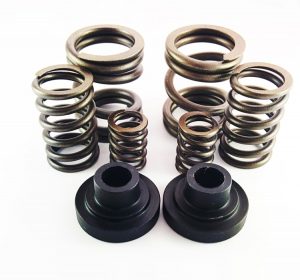 Despite their vast fueling and rpm potential, the P7100 injection pumps used in 4BT and 6BT applications left the assembly line tightly governed. Most P-pumped 6BT Cummins power plants in Dodge Rams were governed between 2,500 and 2,700 RPM, with many beginning to defuel as early as 2,400 rpm. Similar to the lack of rpm solution employed on the VE pump, higher rpm governor springs are all but mandatory in order for P7100-graced engines to reach their full horsepower potential. Aftermarket 3,000-rpm governor spring kits extend the horsepower curve without causing valve float. Beyond governor springs, the popular Mack rack plug will increase rack travel and allow as much as 70cc’s of additional fuel volume into the mix, while larger delivery valves can bring as much as 100cc’s worth of additional fuel into the fold. 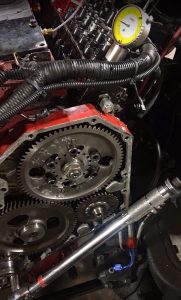 Perhaps no other modification wakes a P-pumped 4BT or 6BT up more than a timing increase. Many Cummins-destined pumps were set to roughly 12 degrees of advance from the factory, but increasing injection timing to 17 to 20 degrees makes a huge difference, namely in horsepower, drivability, and exhaust gas temperature (EGT) reduction. While plenty of further performance gains exist beyond 20 degrees of advancement, the trade-off is poor cold-start performance (especially in northern climates). A timing change can be a bit in-depth for the novice, but can be performed with a dial indicator and injection pump gear puller. 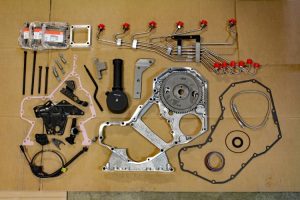 Because the performance potential of the P7100 is so much higher than it is with the VE, conversion kits are available for both the 4BT and 6BT Cummins in the aftermarket. To pull off the swap, you’ll need a different front gear housing (and preferably one where the killer dowel pin has been addressed), gear housing gasket, the P7100 pump gear, the corresponding injection lines and brackets, and a new crank seal. To complete the install, you’ll also need a front cover (along with the cover gasket), a pump support bracket and bolts for the P-pump, and the oil line for the P7100. As you can imagine, the swap is extensive and quickly becomes even more complicated if you have to hunt down all the individual components on your own. It’s not impossible, but it is why all-inconclusive (or close to all-inclusive) conversion kits exist.