What is the Difference Between an ISX15 and X15?

Ever-advancing technology and emissions regulations are the two biggest drivers of engine development in the world. When the ISX15 Cummins began to phase out the legendary N14 back in the late 1990s, it had some very big shoes to fill. Now, 23 years later, many would say the ISX15 more than lived up to the hype. But not only that, the ISX15 eventually morphed into the X15—a Class 8 engine that’s renowned for its durability which, in the modern diesel emissions era, is saying something. So if the ISX15 later became the X15, how similar are these two power plants? If only it were that simple…

Given the fact that it was being produced during the emissions crunch, several different versions of the ISX15 exist. From zero emissions equipment, unit fuel injection, and dual overhead cams to EGR, DPF’s, SCR, variable geometry turbocharging, and common-rail injection, the ISX15 was constantly evolving throughout the entirety of its production run. Then, with the lessons learned along the way and the ISX15’s weak links duly noted, Cummins manufactured a new and improved version of the engine and called it the X15. This time, we’re spotlighting the key design differences between each rendition of the ISX15 and then comparing it to the X15. 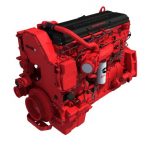 Foundationally, the ISX15 Cummins is sound, with a robust cast-iron block and head design, as well as mid-stop cylinder liners. A bore and stroke of 5.39-inches x 6.65-inches bring this I-6’s displacement to 912 ci (or 14.9L). Depending on the model year and application, horsepower can range anywhere from 400 to 600 hp and, thanks to its long stroke, as much as 2,050 lb-ft of torque could be gleaned out of the platform. The biggest news is in the valvetrain, and specifically the camshafts. Dual overhead cams graced the ISX15 from its inception through ’09, with one camshaft being dedicated to actuating the fuel injectors that were part of the engine’s unit injection system. Beginning in ’10 however, a single overhead cam design debuted alongside common-rail injection (called Xtra-High Pressure Injection, or XPI by Cummins). 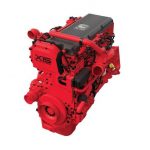 The X15 Cummins retained the same bore and stroke as the ISX15, and the short-block went virtually unchanged as well (block, crankshaft, rods). The X15 also maintained the SOHC design implemented in 2010, along with the high-pressure common-rail injection system. But from the launch of the X15, three different types of engines were available: Efficiency Series, Productivity Series, and Performance Series. The Efficiency Series X15 was obviously geared toward fuel economy, and it delivered a 3-percent improvement over ’16 model year ISX15’s and a 10-percent increase of 2012 engines. The Performance Series X15 featured a revised piston bowl design, higher compression, a slightly different injection pump, a different turbo, a high-flow EGR system, and upgraded piston cooling nozzles and exhaust valves. All of the above provided sound reliability at a premium power level. How about 605 hp and 2,050 lb-ft?! 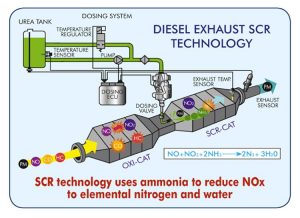 Because the ISX15 lived through a host of ever-tightening federal emission regulations at the turn of the century and early 2000s, the engine had to evolve in order to meet NOx, particulate matter (PM), and eventually greenhouse gas emissions standards. While the ’99-’02 version (ECM CM570 model) was virtually void of emissions control devices, exhaust gas recirculation was introduced in ’02 (ECM CM870) along with a variable geometry turbocharger. After that, PM standards became more stringent, forcing Cummins to add a diesel particulate filter—and the regeneration cycles that come with it—to the ISX15. This was followed shortly thereafter by the addition of selective catalytic reduction (SCR) to further fight NOx output. In 2010 (ECM 2250), the ISX15 also went common-rail, a high-pressure (up to 35,000 psi) injection system that no longer relied on a camshaft to fire the injectors—and it featured solenoid-style injectors capable of pulling off five injection events per combustion cycle. 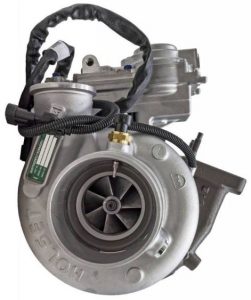 As emissions equipment infiltrated the ISX15 Cummins, so did enhanced turbocharger technology. Before the emissions crunch, the ’99-’02 versions were equipped with a simple, fixed geometry turbo (either a Holset HX55W or an HX60W) with a pneumatically actuated wastegate. Beginning in 2003, variable geometry technology entered the equation in the form of the HE551V, a water-cooled, oil-lubricated turbo with pneumatically actuated variable geometry functionality. By 2007, the HE561VE was being phased in, namely for its quicker-reacting, electric variable geometry actuator. Then from 2010-on, the HE451VE got the call, which was a smaller turbo than the previous two Holset units but came with an even quicker-responding actuator. 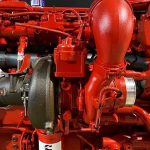 Although it entered service in the latter years of ISX production, the Holset HE400VG was present when the X15 Cummins debuted in 2017. In terms of compressor wheels, the HE400VG’s measured 66mm at the inducer as opposed to the 64mm inducer found in the ISX15’s HE451VE. However, like the HE451VE the HE400VG featured electric VGT actuation and a water-cooled center cartridge. The HE400VG also integrates a turbine shaft speed sensor and temperature sensor. At this time, Holset (or rather Cummins Turbo Technologies) has VGT tech down to a science, with the performance of the HE400VG and those like it offering some of the best performance in the industry. 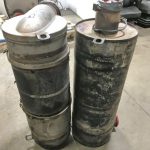 Mechanical problems are few and far between for most properly-maintained ISX15 Cummins, but like any engine, they have their failure points. One of the biggest mechanical worries on DOHC, unit injector versions (’99-‘09) stems from camshaft lobe wear and rocker problems (especially the intake rockers). On emissions-equipped models, EGR valves, EGR coolers, and EGR pressure differential sensors are notorious for failure. In the exhaust after-treatment tract, high idle time and extensive PTO use typically trigger DPF-related (clogged filter) codes, activated by the system’s pressure differential sensors. And while the addition of SCR technology aided engine reliability thanks to less EGR being required to curb NOx, the occasional diesel exhaust fluid (DEF) doser failure is never off the table. 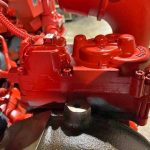 Outside of neglect and abuse, structural turbocharger failures are extremely rare on the ISX15. However, engines equipped with VGT units are prone to soot and carbon-induced sliding nozzle issues on the turbine side, which often leads to actuator failure. An ailing actuator will almost always die before the turbo becomes inoperable, but engine performance will suffer considerably. When actuator failure occurs at higher miles, owners have to weigh the cost of solely replacing the actuator ($850 to $1,000) or starting with a fresh VGT altogether. With the latter proposition being a highly expensive one, some begin to consider alternatives. In cases where multiple actuators have failed and an ISX15 owner operates in a region that doesn’t conduct emissions testing or inspections, some have reverted back to a fixed geometry turbo, a more affordable system, for improved reliability.

Prior to 2017, common-rail ISX15 engines were equipped with high-pressure fuel pumps that could be ticking time bombs. The ceramic fuel plungers (rather than steel) present in the pump that were responsible for producing as much as 35,000 psi worth of injection pressure were prone to premature failure. Some failures proved catastrophic, with a plunger leaving its bore, breaking apart, and sending debris into the fuel injectors and even the rest of the engine. In 2017, steel plungers became standard equipment within the high-pressure fuel pump, and many pre-2017 pumps have since been retrofitted to avoid this type of end-game failure.

X15: A New And Improved Version Of The ISX15 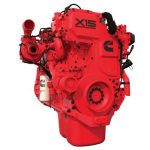 As you would expect from the world’s largest diesel engine manufacturer, Cummins diligently rectified nearly every issue the outgoing ISX15 had before releasing the X15. One of the biggest differences is the X15’s use of low-friction components, such as the water pump, geartrain, oil pump, and pistons, which accounts for some of the fuel economy edge the X15 holds over its ISX15 predecessor—not to mention the fact that it reduced maintenance costs by 30 to 40-percent. There are still emissions equipment-related issues, but that’s inevitable in the modern era, with so much complexity wrapped up in an engine’s EGR, DPF, SCR, and DOC components. But despite being saddled with modern-era emissions equipment, the X15’s reliability has been compared to the N14—one of the most durable Class 8 engines Cummins ever produced. 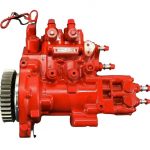 When the ISX15 transformed into the X15, all the previous emissions-curbing devices remained along for the ride (EGR, DPF, DOC, SCR), but Cummins had begun to fine-tune its after-treatment system. By 2016, an extended-interval DPF became available for the ISX15 that could go 500,000 miles in conventional linehaul applications before requiring an ash cleaning. However, as is the case with every modern emissions-era diesel engine, pressure differential sensors, NOx sensor, and EGT sensor failure are always possible. Sticking EGR valves represent a good portion of the failures X15 owners see, much of which can be traced back to extended idle time. A larger issue revolves around high-pressure fuel pump (or injection pump) failure, with a major recall being ordered for them in 2021. However, most X15 owners are more than happy with Cummins’ latest power plant. It’s powerful, one of the cleanest over-the-road engines on the market, and arguably returns the highest fuel economy in its class.