What Turbo Is On The 8.3L Cummins? 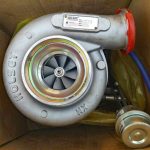 In the medium-duty segment, the all-iron, wet-sleeve 8.3L Cummins is renowned for its workhorse nature, where million-mile durability can be had in any bus, motor home, fire engine, or garbage truck it resides in. Specifically, the mechanical injection 6CT—produced for on-highway applications from 1985 to 1998—enjoys a sound reputation for reliability. Power ratings ranged from as little as 185 hp all the way up to 260 hp, and torque spanned from 631 lb-ft to 889 lb-ft, but each power plant used a similar turbocharger. That turbocharger is the Holset HX40, the big brother of the HX35 found on the smaller 6BT (5.9L) Cummins from the same era.

To support the 8.3L Cummins’ various power ratings, a few variations of the HX40 were offered. Five compressor wheels, two different turbine wheels, and wastegated and non-wastegated exhaust housings with various A/R’s all exist. Believe it or not, Holset even manufactured a “Super” model of the HX40. Below, we’ll go over the DNA of the HX40 and its different renditions, help you identify which one is bolted to your engine, discuss its biggest failure point, and even touch on why the HX40 was a performance turbo option in the automotive diesel realm for a period and why it still is in a niche gasoline engine market. 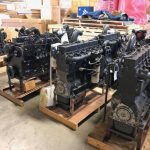 For a bit of background on the 8.3L 6CT Cummins, it was first introduced in 1985 as a low-speed diesel designed for a plethora of uses. Intended applications included medium-duty on-highway, marine, agriculture, and power generation. Beyond its “medium-duty” designation, the 8.3 Cummins employed many heavy-duty components. First and foremost, the 6CT featured removable wet-sleeve cylinder liners for ease of serviceability. An induction hardened crankshaft making use of seven main bearings, forged-steel I-beam connecting rods, and a hardened cast-iron camshaft with seven replaceable precision bearings also added to the 8.3L’s robust mechanical makeup. The 506ci inline-six tipped the scales at a hefty 1,630 pounds, boasted a bore and stroke of 4.49-inches x 5.31-inches, and featured a 2-valve, cross-flow, cast-iron cylinder head. 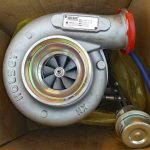 On the 8.3L Cummins, where the turbocharger was the sole means of emissions control, Cummins chose the Holset HX40 platform for its ability to match the engine’s fueling requirements (which of course, kept PM emissions low). Simplistic in literally every way, the HX40 is of a fixed geometry design, utilizes dual journal bearings, and ships from the OEM with either a T3 or T4 turbine inlet on the exhaust housing. Aside from its larger compressor wheel, turbine wheel, and exhaust housing, the HX40 highly resembles the HX35 found on the 8.3L Cummins’ little brother engine, the 5.9L 6BT. 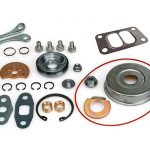 Being of fixed geometry, journal bearing design not only lends itself to non-complexity, but it also means the HX40 can be rebuilt both easily and affordably. And thanks to sharing the same center cartridge as the HX35, the HX40 also shares its minor component parts with its little brother. A standard overhaul kit—shown here with a new 360-degree thrust washer, fresh journal bearings, gaskets, piston ring seals, C-clips, oil deflector, and turbine housing bolts—comes with everything but a new compressor and turbine wheel, and retails for just $60 to $80. 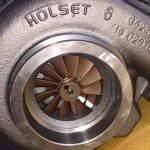 The most recognizable difference between HX40 turbos is whether or not it’s equipped with a wastegate or not. Non-wastegated versions enjoy the aforementioned HX40 nomenclature while a model with a wastegate would carry the label HX40W. On the compressor side (intake, cold, or boost side), five different wheels were available. Of the 8-blade variety, two different wheels were offered: one with a 60mm inducer and the other a 58mm—with an 83mm exducer present on either one. A six and a 7-blade compressor wheel was also available, with an exducer calipering 86mm. The last compressor option was reserved for the HX40 Super (more on that model below), which was a machined wheel rather than a cast one, but still measured 60mm/86mm. The HX40’s turbine wheel options are more straightforward, with only 64mm exducer and 76mm inducer dimensions offered, in either 12-blade (most common) or 10-blade form. 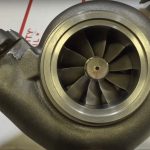 As mentioned above, a 10-blade version of the 64mm/76mm turbine wheel did exist in the HX40 line, though it was reserved for the Super 40. From a performance standpoint, the 10-blade is more desirable than the 12-blade due to its perceived improvement in exhaust flow at elevated engine rpm. On the opposite end of the turboshaft, the HX40 Super’s machined compressor (often referred to as billet) is said to move as much as 70 pounds per minute of air, a fair amount more than the cast wheel version. That’s roughly 1,000 cfm from a 60mm compressor (inducer) turbo—easily an above-average flow rating. 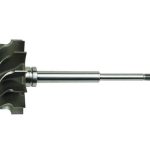 To be sure, the 8.3L Cummins it’s bolted to often experiences problems before the HX40 does. However, in instances where the HX40 compressor is exposed to surge, or “turbo bark” (usually from chopping the throttle) it can spell disaster for the turbine shaft. In this scenario, drive pressure abruptly falls off before boost, and the shaft is notorious for sheering. Some blame the failure on oiling issues while others deem the turbine shaft too small in diameter, but the bottom line is that an HX40 that only sees factory-intended boost and drive pressure levels will likely never experience shaft failure. 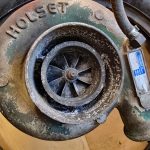 Quickly outdated in the late 1990s and early 2000s, the HX40 found a home in the 5.9L Cummins aftermarket for a period. It was seen as a larger, drop-in replacement for owners that had made considerable fuel system modifications, and its junkyard availability meant one could be obtained on the cheap. In many of these applications, a direct take-out HX40 proved to produce noticeable turbo lag thanks to the 5.9L’s lack of displacement as compared with the 8.3L. In other applications, the HX40’s inability to handle compressor surge rose to the forefront. As better aftermarket turbo options arrived, the HX40 faded into the background of hot-rodded diesels. 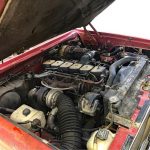 To help bring the HX40 to life more quickly (i.e. faster spool up), hybrid HX40 models sprang up from both DIY camps and performance diesel companies. Some of these hybrid turbos combine a machined HX35 exhaust housing with a stock HX40 compressor housing, center cartridge, and turbine wheel and shaft. With minimal machining, it’s an inexpensive modification that solves the turbo lag issue. Some HX40-based hybrids are also said to address the aforementioned turbine shaft oiling issue. 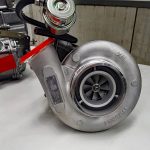 Despite how far turbo technology has come in recent years, there remains some demand for the HX40. This is likely due to the fact that Cummins still produces renditions of the 8.3L, but it’s hard to ignore the fact that the 5.9L performance world is still alive, or that gasoline owners have turned to it as a cheap performance option. Various companies offer billet compressor wheel versions of the HX40, some even sporting a wheel as large as 67mm on the inducer side. And thanks to its exhaust housings being so easily interchanged with one off of an HX35, drivability can be fine-tuned without sacrificing high-rpm performance.

The HX40 Lives On…In The Most Peculiar Of Ways 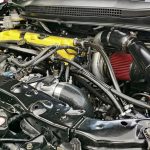 Other than the OEM versions still humming along on 8.3L Cummins engines, reworked versions of the HX40 have found a happy home in the import world. Countless DSM-powered Talons and Eclipses have been spotted with one under the hood, and even the Honda crowd has gotten in on the action. The K20 VTEC engine shown here produces more than 440 hp thanks to its HX40. In a lightweight Honda Civic Type R, this kind of power can send the lightweight, front-wheel drive hatchback through the quarter-mile in 10-second intervals.