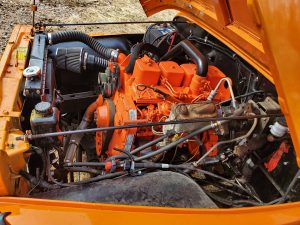 It’s durable, it’s reliable, it provides unmatched off-idle torque, and it can double a vehicle’s fuel economy. No wonder the 4BT Cummins has become one of the premier engines for swap projects. And perhaps no other group of enthusiasts has taken to the industrial strength 3.9L diesel quite like Jeep Wrangler owners. For them, the 4BT solves several problems at once: they get gobs of low-rpm grunt, the mileage they lost with the install of a lift and bigger tires is redeemed (and then some), and they practically have to fabricate a reason to pop the hood.

For these folks, the 4BT is their forever engine. Once it goes between the frame rails, it’s not expected to ever come back out. But what’s involved in converting a Wrangler to 4BT power? After all, sourcing an engine is only the beginning. Mounting it, adequately cooling it, and deciding which transmission to use all take time—not to mention that supporting the 760-pound all-iron oil-burner will force you to take stock of your front suspension. Whether you’re swapping a 4BT into a CJ, YJ, TJ or JK, we’ll cover all of that and more below.

Why the 4BT Works

Part of the 4BT’s appeal for Wrangler owners stems from its packaging size. Dimensionally, the 4BT is similar to a small-black Chevy V-8 (and you’ve probably seen a small-block in a CJ a time or two…). At approximately 30.6-inches long and 24.6-inches wide, you won’t be hacking up the firewall to squeeze it into place, and you certainly won’t have any issues clearing the fender wells. Plenty of space exists to accommodate a radiator and even an air-to-air intercooler in front of the engine. However, at roughly 37.7-inches tall, axle to oil pan clearance is the primary concern with the 4BT. Thankfully, suspension lifts are as common as winches in the Wrangler world, so it isn’t much of a problem.

Don’t Skimp On The Engine 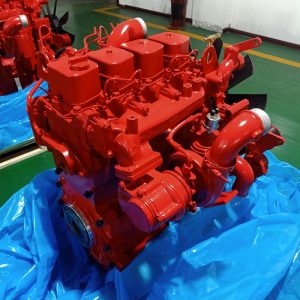 Decades of dependability and 500,000-mile durability factored into your decision to go with a 4BT, right? With this being the last engine you plan to drop into your Wrangler, don’t leave anything to chance. As the price of used 4BT engines has increased over the years, so too has the gamble you take by dropping a take-out engine directly into place and calling it good. Aside from a compression test or a blow-by visual, there is no real way of knowing the true condition of a used or even second-hand engine. For ultimate peace of mind, it pays to either have your used 4BT rebuilt by a professional engine builder. Another option is to source a used, reman or component build 4BT from a reputable vendor to begin with.

Each used 4BT we sell at Big Bear Engine Company is treated to an inspection from head to toe (oil pan to valve covers), along with a full turbo analysis and injector cleaning. However, the used market isn't what it used to be just 5 years ago. Many of the 4B on the market were pulled from liquidated Bread Trucks and Step Vans that have now been long sold off. We mostly specialize in component build 4BTs which are a hybrid of reman parts and new replacement components. Many times during a rebuild we use a new block, head, camshaft, crankshaft, pistons etc... and then only reman smaller non-wearable parts as needed (usually aftercoolers, inlet and outlet connections, rocker assemblies, cross over tubes) The great thing about component build units is that it is mostly a new engine built with fresh OEM and Aftermarket parts. It's the closest thing you can get to a brand new 4BT that left the factory floor in 1991! 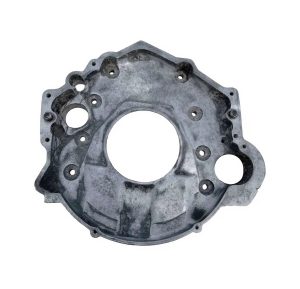 As straightforward as it may seem, expect to have 80 to 120 hours wrapped up in the conversion process. Some key requirements (and all the work they’ll entail) will be: motor mounts, transmission, transmission adapter plate and/or bellhousing, a proper fuel supply system for the injection pump, suspension sufficient enough to support the engine’s weight, wiring (albeit minimum in most cases), and proper cooling, air intake, and exhaust systems. You’ll also have to consider whether or not vacuum-assist brakes will suffice, or if you want to convert to hydroboost (run off of the accessory drives).

Additionally, those who choose to do performance mods after the break-in period need to be aware that compound turbos, performance camshafts, modified head studs, larger injectors/nozzles, fuel system upgrades and cold air intakes all take a considerable amount of time and money; as well as the expertise to know how to get it done correctly. Not upgrading the air system in-step with the fuel system can be a recipe for disaster. Remember to curb your expectations and don't think you'll get 800 HP because of a few fuel system tweaks. Gradual increases is the name of the game. 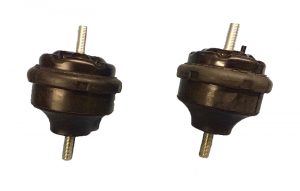 The 4BT is known for its NVH, but you can cut down on a lot of it by purchasing quality motor mounts and installing them in an optimal location. Hydraulic mounts do the best job of isolating vibration and engine noise from the chassis, but exact location of the mount has a lot to do with it, too. To quell vibration, make sure the motor mounts are installed at roughly a 45-degree angle and that they’re located above the center line of the crankshaft. For even weight distribution, also ensure that the motor mounts are centered on the block. On later model year 4BT’s, be mindful of the location of the vacuum pump/power steering pump combo or the motor mounts won’t clear. Also make a note of your clearance around the starter.

Due to the 4BT inherently being a cool-runner (water temp normally checks in between 170-190 degrees F), a standard size radiator may be the extent of what you need to do to keep coolant temp in the safe zone. A repurposed (or reused) factory TJ radiator has proven sufficient for the 4BT’s needs in countless swaps, but combining that with electronically controlled fans is never a bad idea for owners that live on the trail. To allow the engine to breathe, you’ll likely have to piece together your own air intake system, which will be determined based on the low-mount (GM 4BT), high-mount (Ford 4BT), or gen-set style turbo location. Exhaust work, while similar from vehicle to vehicle, is usually specific to each build. Turning this over to the local muffler shop shouldn’t be time-consuming or expensive, even for 3-inch diameter piping. 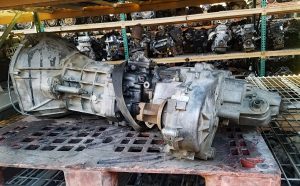 The NV4500 (there are Ford and GM versions), and AX-15 (again, there are different versions) five-speed manual transmissions are some of the more popular transmission options for 4BT swaps, but with the right adapter plate many other transmissions, such as the TH400, SM465, and Borg Warner T19, can be made to work. Most 4BT engines left the assembly line with an SAE #3 bellhousing, although there are four different versions of it. For manual transmission options, it’s best to use the flywheel from the 4BT to determine which clutch and pressure plate you’ll need.

The NV4500: Widely Available and Tough as Nails

If you’re wondering why the NV4500—and specifically the Dodge version—is such a popular option behind the 4BT, it’s because it was used behind the 5.9L Cummins of the same era. This means it’s more than tough enough to handle the grunt of the 3.9L 4BT. Sourcing a diesel-specific version of the NV4500 is important if you want to keep the transmission portion of the 4BT swap as straightforward as possible. The flywheel, bellhousing, transmission, and even the 5.9L Cummins starter will all swap right over. This 5 Speed with an Overdrive is an enthusiast favorite especially if you are looking to increase torque output with some fuel system, turbo, cam or head stud upgrades down the line.

For several reasons, the suspension under your Wrangler will need to be upgraded in order to accommodate a 4BT. First and foremost, the leaf springs or coil springs in the front suspension system will need to be stiffer. Having leaf springs or coil springs custom built for your Wrangler is the surest path to being satisfied with its final ride height and overall performance. Additional suspension lift may also be required to clear the transmission tunnel on certain Jeeps (especially TJ’s), along with ensuring the 4BT’s oil pan maintains optimum axle clearance. 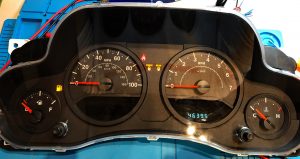 Sure, very few electronics are required for the 4BT to operate, but if you’re swapping one into a TJ you will still need the ECU to control the OEM instrument cluster, and aftermarket gauges, sensors and senders may even be required to read certain parameters. Swapping a 4BT into a JK complicates things further, as both the ECU and TIPM need to be in constant communication with each other. Both controllers will be required to keep your factory gauges functioning properly. Of course, a complete re-wire isn’t out of the question, but is extremely time-consuming if you choose to do it yourself, or pricey if you outsource it. If you do outsource it we recommend Pittsburgh Power or Go ECM Diesel for anything related to ECM/ECU and wiring harnesses for mid to heavy duty diesel engines. 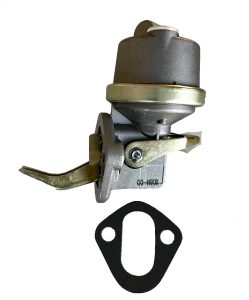 Diesel engines, especially older mechanical power plants such as the 4BT, are designed around the use of fuel (not air, as in gasoline engines). This means the injection pump, be it the rotary Bosch VE or P7100 (i.e. P-pump), needs to see adequate fuel supply pressure from a diesel-rated lift pump. The engine-mounted, OEM diaphragm style pump for the VE injection pump or the factory transfer pump specifically designed to work with the P-pump will be more than sufficient, but your Wrangler’s old fuel system will have to be re-engineered a bit. The factory gas tank can be reused but the sending unit will require the addition of a draw straw, unless you prefer to add a sump in the tank. The fuel lines can be repurposed but the in-tank fuel pump’s services will no longer be needed. Additionally, the both the Rotary VE/VP-15 and Inline P-7100 pumps can be tuned up for upgraded HP and torque.